Thousand of millions euros against high energy prices and support for every crucial issue. The intertwined fate of the Western Balkans and the EU, following Ursula von der Leyen’s tour in the region

Unity and solidarity. This is the summary of the 3-day and 5-stop tour in the Western Balkans of the President of the European Commission, Ursula von der Leyen, between October 26 and 28. She skipped only the stop in Montenegro (due to “bad weather”), that will soon be rescheduled. But the message would not have been different.

The European Union wants to close all the gaps with the Balkan region, because in this new crisis – the energy crisis – the distance could become unbridgeable.

And this is why the President of the European Commission delivered a decisive answer, tangible promises on the immediate future and an irreversible prospect of accession to the European Union.

What you are going to read here are President von der Leyen’s results in her most important visit to the Western Balkans.

A billion euros against the crisis

The tour made by President von der Leyen in the Western Balkans is linked by a common thread: the EU support to tackle the energy crisis.

Against the impact of high energy prices on households and businesses, the leader of the European Commission announced direct budget support for each of the six partners.

An overall package of more than 470 million euros: 80 for North Macedonia, 80 for Albania, 75 for Kosovo, 70 for Bosnia and Herzegovina, 165 for Serbia (the amount for Montenegro will be communicated during the next visit, EU sources say).

The procedures will be completed by the end of the year and the grants will be available in January.

Meanwhile, the ambition is greater in the medium and long term. That is why a 500-million-euro plan for the entire region has also been designed in Brussels.

The second part of the energy support will have 3 pillars, according to the particularities and strengths of each country: infrastructure, energy efficiency and renewable energy.

There will be also the Trans-Balkan Electricity Corridor, a 400 kilovolt transmission network that will link Italy to Bulgaria, passing through Montenegro, Bosnia and Herzegovina and Serbia.

This project will address one of the priorities of European energy policy: the integration of the national electricity markets all over the continent.

And finally, the Ionian-Adriatic Pipeline (Iap), a 516 kilometer-long bi-directional infrastructure, with a capacity of 5 billion cubic meters per year.

It will be linked to the Trans-Adriatic Pipeline (Tap), which transports gas from Azerbaijan to Italy, and will run through Albania, Montenegro and Bosnia and Herzegovina, all the way to Split (Croatia).

Bosnia in the heart

“In the heart of Brussels, there is a piece of Bosnia and Herzegovina. It is a huge, colorful mural, painted by a young artist from Sarajevo, Rikardo Druškić. The mural sends a very clear message: you have a place in the heart of the European Union, you are part of Europe”.

This is how President von der Leyen’s speech in Sarajevo began, with a story that is a symbol of the “faith in Europe, that is even stronger among young people“. A generation born after the war, that “does not want the country only to be defined and divided by its tragic past”. For young Bosnians, “Europe means economic prosperity and freedom of movement”. All these goals pass through EU membership and now the political institutions have to realize a plan of institutional and constitutional reforms.

The European Commission’s support has never been so strong, as demonstrated by the recommendation to the European Council to grant candidate status to Bosnia and Herzegovina at the EU leaders’ Summit in December: “I will personally defend you”, President von der Leyen promised. “The door of the European Union is open, please seize the opportunity and use this invitation”.

Facing all the difficulties – from the energy crisis to the Russian destabilization, that is deepening the division between the two entities – the only solution is unity and solidarity, internally and with the European Union. Once again, this is demonstrated by the example of a young Bosnian:

“It was not easy for Lana Pudar, the European gold medal in the women’s 200-metre butterfly, to train and to reach this enormous success. For example, she could not train in the city that lacks an Olympic-size swimming pool. But Lana has made it against all odds. And now, because of her success, a new Olympic swimming pool will be built in Mostar”.

The 16-year-old swimmer has become a symbol throughout the country:

“Her victory has been celebrated in all entities and across all boundaries. This is the dream of your young people, to be united in Bosnia and Herzegovina’s diversity and with your neighbors, in one European family. Let’s work to do it together”.

In her stops in Pristina (Kosovo) and Jelašnica (Serbia), President von der Leyen emphasized her confidence in “a solution through dialogue”. She referred to the deadline for the re-registration of vehicles in Kosovo on October 31, in accordance with the governmental decision to impose the replacement of Serbian license plates (widespread among the Serbian minority in the country) with Kosovar plates.

The issue had already triggered violent reactions in Norther Kosovo at the end of July (due to the approach of the original deadline of August 1st), forcing Pristina to extend the deadline twice. Since September 1st, it is mandatory to use a vignette covering the Serbian emblem (as in Serbia with Kosovar vehicles). By September 30 – with a further postponement to October 31 – all ethnic Serbian citizens living in Kosovo should have re-registered their vehicles, using a license plate issued by the authorities in Pristina. However, Serbia and Kosovo have not managed to reach a sustainable, final and mutual agreement on license plates in the last three months. This is why the diplomatic conflict – started more than a year ago – is still unresolved, with sporadic episodes of violence at border crossings and tangible repercussions on the population.

A sort of compromise was found when President von der Leyen said goodbye to the Western Balkans, in the evening of October 28. While the authorities in Brussels and Washington were asking Kosovo to postpone the deadline by 10 months, Prime Minister Albin Kurti announced a new step-by-step plan for the implementation of the rules on the Serbian license plates. The deadline is still November 1st. The citizens who do not comply with the rules will receive a warning until November 21, a fine between November 21 and January 21, and a temporary number-plate will be applied between January 21 and April 21. From 21 April 2023 onwards the rules will enter into force permanently and non-compliant vehicles will be seized.

However, the compromise was not negotiated with Belgrade, which responded by raising the alert level for its armed forces. And the European Commission warned to “respect the procedures agreed in the dialogue” with Serbia.

Talking about diplomatic conflicts in the region, the dispute between Bulgaria and North Macedonia seems – apparently – to be overcome. “We will fully respect your identity and language“, President von der Leyen promised during her visit to Skopje, speaking of the EU accession negotiations started in July, after three years of stalemate. The tangible proof is represented by the first official document signed in the accession negotiations, “with no footnote, no asterisk, on an equal footing with all the 24 languages of the European Union”. This is the agreement on operational cooperation in border management with Frontex (European Border and Coast Guard Agency), translated also into Macedonian:

“It shows that there can be no doubt that the Macedonian language is your language, and we fully respect that. I am deeply convinced that it will not take too long until we have 25 official languages“.

Concerning the Frontex agreement, it has to be underlined that the EU officers will be deployed not only at the Macedonian borders with the EU (Greece and Bulgaria), but also with the other non-EU Balkan countries (Serbia, Kosovo and Albania). And the European Commission wants Albania, Bosnia and Herzegovina, Montenegro and Serbia to do the same. In North Macedonia, joint operations will be carried out with the national authorities to address irregular migration, with an increased presence from the current 300 members of the standing corps. 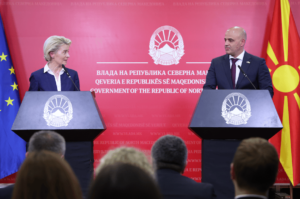 All these issues will converge on December 6, when the new EU-Western Balkans summit will take place in Tirana. “It is almost unbelievable to host another European event of such great importance, after the Conference League final”, the Prime Minister of Albania, Edi Rama, cheered. “We will meet again in December in Tirana, it will be a very important meeting for the Western Balkans”, President von der Leyen confirmed.

The background is all here. For the next steps, we will have to wait another month.