The new Slovenian Prime Minister, Robert Golob, has decided to remove the barbed wire fence on the Croatian border. A (lonely) revolution in the European migration policy along the Balkan route

While the whole of Europe is discussing how to stop a potential increase in migrant arrivals along the Balkan route, only one country of the European Union directly affected by this issue has made a tangible change in its migration policy characterized by walls. One of the first decisions taken by the new Prime Minister of Slovenia, Robert Golob, was to tear down the barbed wire fence on the Croatian border.

Something completely new on a continent where border walls have been built for decades, in order to prevent a natural need, that is, the search for better living conditions. And most of all, whose countries have been determining the conditions that force thousands of people to travel dangerous and inhuman routes. In the midst of a renewed trend of tightening visa restrictions and of building new physical barriers, Slovenia has taken a clear stand against the border walls in Europe. And not only for humanitarian reasons, but especially because it is just common sense.

The new policy in Ljubljana came with the inauguration of the Green, liberal and social-democratic government led by the former energy entrepreneur Golob, on June 1st, 2022. In his first speech as Head of the government, Golob expressed his willingness to change completely the migration policy of the past 7 years, starting with dismantling the 116-kilometer-long barbed wire fence.

The border wall was erected by the centrist Prime Minister Miro Cerar in autumn 2015 and was extended to its maximum length by his successor Marjan Šarec. The anti-migrant border fence became later the symbol of the nationalist government led by Janez Janša (from 2020 to spring 2022), in line with the last decade’s European policy of closing borders and illegally pushing back migrants at the external border of the EU.

Following Golob’s promises, the dismantling work began in midsummer at the Krmačina border crossing, near Metlika. The Minister of the Interior, Tatjana Bobnar, inaugurated the work, emphasizing the respect for human rights and the Rule of Law: “It is unacceptable that barbed wire has become a constant element of our migration policy. The facts have shown that this barrier has not stopped the flow of migrants, but it has instead negatively affected life near the border, causing the death of people and animals”.

Prime Minister Golob himself underlined that the priority must become the reception of asylum seeker, whose situation is “critical”, because of Janša cabinet’s responsibilities. The Slovenian government established an advisory committee to promote safer migration routes, more efficient asylum procedures and easier conditions for international protection and social integration. The committee has already instructed the police to pay special attention to the protection of vulnerable groups, while ensuring border control. “Migration is an integral part of modern societies“, Minister Bobnar stressed, explaining that “systematic integration into society and the labour market” of people entering the country is necessary.

The border walls in Europe

But Europe is already a fortified continent. According to rough estimates, the total length of border walls – built or under construction – in Europe is 1950 kilometers, the same distance from Lisbon to Vilnius, from one end to the other of the European Union. Even more stunning is the difference between walls built and torn down in 2022 on the European external borders: 736 kilometers against 116. Slovenia is the only country that has taken measures to reverse the trend.

At the end of August, Lithuania completed the 550-kilometer-long barbed wire fence on the border with Belarus (costing 50 million euros), to face the so-called ‘hybrid war’ of the self-proclaimed Belarusian President, Alexander Lukashenko. At the same time, Poland completed the 186-kilometer-long wall on the border with Belarus (351 million euros). With its motion detectors and thermal cameras, it represents the Polish solution to push back a few thousand migrants along the Northern sector of its Eastern border. A 136-kilometer-long barbed wire fence with Belarus is also being built in Latvia.

In the last days, Finland announced the construction of a 260-kilometer-long steel barrier with Russia, to be completed within 4 years. It should cover one fifth of the total length of the border at its most critical South-Eastern crossings. Estonia, Latvia and Norway have already built border walls with Russia, while Lithuania has done the same with the Russian exclave Kaliningrad.

Read also: One (human) Bridge to Idomeni. And to Bosnia

The walls of the Spanish exclaves in North Africa, Ceuta and Melilla, are shorter. Nonetheless, they have been causing humanitarian tragedies among asylum seekers coming from Morocco. Then, there are the barrier separating the island of Cyprus in two since 1974, the ‘Peace Walls’ in Northern Ireland (to be demolished in 2023) and the French fence leading to the port of Calais, the gateway to the United Kingdom.

In the Balkan region the total length of the border walls exceeds 850 kilometers, having already considered the 116-kilometer-long section dismantled in Slovenia. Between 2014 and 2015, walls were built by Greece, Bulgaria, North Macedonia, Slovenia and Hungary to stop what only a year later was called the ‘migrant crisis’. Serbia has also started building a wall on its Southern border with North Macedonia since 2020. 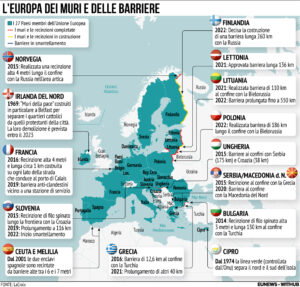 The “non-alignment on visa policy” means that citizens of countries such as India, Tunisia and Burundi can travel without a visa to the Balkan countries and, from there, they can try to cross the external border of the European Union. Visa liberalization for Schengen Area – valid for 63 countries around the world – ensures free movement with their own passport, without any additional requirement for short-term stays.

The problem for Brussels regards 5 Balkan countries (Albania, Bosnia and Herzegovina, Montenegro, North Macedonia and Serbia), while Kosovo has been waiting for the EU Council decision on visa liberalization since 2018. The warning to Belgrade is clear: “I hope Serbian authorities will align their visa policy with ours, but I cannot exclude a suspension of the visa regime“, the EU Commissioner for Home Affairs, Ylva Johansson, stated.

The issue of visa-free agreements was also part of the discussions at the summit in Budapest with the President of Serbia, Aleksandar Vučić, the Chancellor of Austria, Karl Nehammer, and the Prime Minister of Hungary, Viktor Orbán, on October 3. The aim was to find shared solutions to handle the Balkan route, while Vučić promised to align Serbian visa policy with the EU visa regime “by the end of the year”.

The action plan of the two EU Member States – Austria and Hungary – and the candidate for EU membership since 2012 – Serbia – is based on two cornerstones. It is foreseen not only a “financial support” to Belgrade for migrants repatriation, but also an “increased cooperation” of the police forces along the Serbian borders, including the Southern border with North Macedonia. Right where the Fortress Europe is ‘protected’ by one of its kilometer-long walls. Which only Slovenia is trying to tear down.