The first meeting of the European Political Community – a platform for dialogue for 44 leaders all over the continent – took place in Prague on October 6. A summit as we have not seen any in decades

October 6, 2022, can be marked on the calendar as a key-date for the present and near future of Europe. Whether this will be a turning point in our history, only time will tell. However, it has been decades since we have witnessed such a high-level meeting – both politically and numerically – for a collective rethinking on how to best represent the interests of the entire continent. We can mention the Treaty of Rome – which established in 1957 the European Economic Community – or the Maastricht Treaty – which founded in 1992 the European Union as we know it. Or, more simply, we can recall what has just happened in Prague, in the halls of the medieval castle. The European Political Community (EPC) brought 44 Heads of State and Government at the same table, to discuss the most crucial common challenges that all the European countries are facing and will face in the short term.

We can start from here to imagine a common project, still focused on the values that characterize the European Union, without renouncing enlarged cooperation with partners that are not, not yet or no longer in the EU. Here is a guide on the new European Political Community.

What is the European Political Community?

The European Political Community is the new biannual dialogue forum for European leaders from all over the continent, and not only from the European Union.

It is based on a joint idea of the President of France, Emmanuel Macron, and the President of the European Council, Charles Michel. They both presented their proposals in May, with the aim to “deepen convergence with EU partners on common strategic challenges”. We can say that Macron thought it and Michel grounded it.

The green light for this dialogue platform was given by the 27 EU leaders at the European Council on June 24, when they decided to follow a path that would redesign integration policy on the continent, overcoming the current binary vision inside/outside the EU.

Who was in the European Political Community?

Czechia held the chairmanship of the first EPC meeting. In the future, it will alternate between EU and non-EU countries: in six months’ time it will be held by Moldova, then Spain and the United Kingdom.

EU sources say that not necessarily the leaders invited to the first meeting will participate in the following meetings. Nor it is certain that those who participated on October 6 in Prague will still be interested in the future. The European micro-States of Andorra, Monaco and San Marino were not invited this time. But the same sources do not exclude that they might attend the next summit in Chişinău. 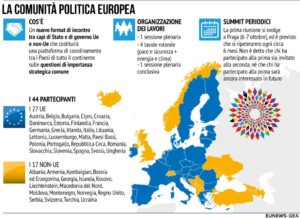 In Prague, leaders discussed security and peace on the European continent in a flexible and informal format.

There were an opening and a closing plenary session, with a working dinner. But the heart of the project was represented by round tables (about 10 members each) and bilateral meetings.

The two macro-themes were peace and security, and energy, climate and economics, in the background of the condemnation of Russian war in Ukraine and the support to Kiev.

Among the several bilateral meetings, we can mention belligerents Azerbaijan-Armenia, as well as Turkey-Greece-Cyprus on the Eastern Mediterranean tensions and Kosovo-Serbia on the normalization process. All the other leaders were there to help mediate, as well as the President of the European Commission, Ursula von der Leyen.

Not only the Russian war in Ukraine, but also the energy crisis was addressed as an element of instability. There will be a common effort for a critical infrastructure defense strategy and a coordination on energy diversification.

Why does it matter to the Balkans?

As the European Political Community was proposed, some concerns were raised in the Western Balkans about the risk that the new platform could be a diversion from the EU enlargement process. During his trip to all six countries, President Michel himself reassured Balkan partners on the benefits of regular high-level meetings for their immediate political integration on common interest issues.

EU officials continue to reassure that there is no desire to replace the EU enlargement process with a new European initiative. But it is also necessary to pursue “broader discussions” with the six Balkan countries that are not exclusively about EU membership.

The intention not to jeopardize the accession to the EU of the Western Balkans with the new European project is even more evident thanks to the proposal of a potential reform of the EU enlargement process. The President of the European Council suggested the possibility of rethinking “a faster, gradual and reversible process”, with “tangible socio-economic benefits during the accession negotiations, instead of waiting until its end”.

In other words, a candidate country could be involved and could benefit from European programs and funding in specific areas (Internal Market, energy, data roaming…), as it achieves compliance with EU parameters in that area. At the same time, if there were backsliding (e.g. on the rule of law or respect for human rights), the benefits previously obtained would be withdrawn. 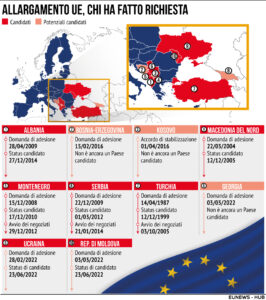 Why does it matter to you?

If you think about it, what international organizations are always accused of is their little impact on real issues for citizens, due to the bureaucratic apparatus and the lack of commitment from leaders, who really hold the power.

However, here we are dealing with something completely different, with European Heads of State and Government meeting in a very flexible format to directly discuss about the most crucial issues. The absence of conclusions or joint declarations lighten the weight of agreements to be reached in a single day on issues that are too complex, or with too many conflicting interests to take into account. As diplomatic conflicts and wars are prevented by dialogue, these meetings among the most powerful leaders should be strengthen.

The discussions focused on energy crisis, climate, war in Ukraine, infrastructure defense, economics, university education, gas supplies, peace on the continent. In short, all topics that are in some way important also for ordinary citizens. Because each of these issues has consequences both in everyday life and in prospects for the future.

This is why the European Political Community cannot fail to have a direct or indirect impact on our daily lives, as the informal discussions will find an outcome in tangible actions on the ground. Now, everyone should pay attention that this forum does not turn into a mere exercise in style. And, above all, that it does not betray its nature as an engine of unity in Europe.