EuroPride 2022 is ready to take place in Belgrade, after weeks of tense relations with the Serbian authorities. Interview with coordinator Goran Miletić and European Pride Organisers Association (EPOA) board member Steve Taylor

EuroPride 2022 is ready to take place in Belgrade, but the last couple of weeks brought some unexpected and unfortunate news. Goran Miletić, coordinator of Belgrade EuroPride 2022, and Steve Taylor, Board Member of the European Pride Organisers Association (EPOA), explained BarBalkans what is happening and why this event is so important for Serbia and for Europe. And for the rights of everyone, all over the world.

In 2019, Belgrade was chosen as the host city for EuroPride 2022, the annual European event in support of LGBTQ+ rights. The Serbian government led by Ana Brnabić guaranteed support to a “safe and successful” Belgrade Pride. Ahead of the event scheduled between September 12 and 18 (with the march on Saturday 17), protests organized by ultranationalist homophobic groups and the Serbian Orthodox Church took place in the streets of Belgrade.

On August 27, the Serbian President, Aleksandar Vučić, announced that the EuroPride would be “postponed or canceled” (but he does not have the power to ban it), due to “more urgent issues”. These issues include the crisis with Kosovo. It is no coincidence that the historic compromise agreement on identity documents between Belgrade and Pristina was announced in the same afternoon. Vučić’ strategy is to divert the attention of the far right/conservative groups and the Orthodox Church from the defeat of Serbian nationalism in Kosovo, because this is the electorate on which the Serbian President has built his political success.

However, in this way Vučić is increasing tensions within Serbia and indirectly legitimizing violence by homophobic nationalists against the marchers, who will arrive in Belgrade from all over Europe in any case. The EuroPride organizers have confirmed on several occasions that the event is not cancelled and that the March will take place on September 17. A ban would violate the national Constitution and the European Convention on Human Rights.

The LGBT Intergroup of the European Parliament expressed its support to the organizers and its members confirmed that they will be present at the march, while a letter signed by 145 MEPs urged President Vučić and Prime Minister Brnabić to fulfill their commitments and ensure a safe EuroPride. 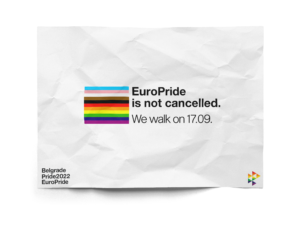 All eyes on Serbia

After the clash in the last couple of weeks, are you in contact with the Serbian authorities?

Goran: “We are still in contact with several authorities, including a coordination group with all ministers of the Serbian government and the Prime Minister Office. We have permanent communication with them and we are trying to find some kind of compromise. I know it is not nice the word ‘compromise’, when it comes to freedom of assembly, but we are trying to find a solution”.

What do you mean by compromise?

Goran: “It could be concerts in a better venue in terms of security for the government, even if we have sufficient private security and cooperation with the police. Or it could be a shorter march, but there is no discussion about it: without the march, there is no Pride. We can discuss things like these, but we need to have guarantees that all the criteria of Belgrade Pride will be respected. Because we organize the Pride Month every year, this is not something new for us”.

What is the situation right now?

Goran: “At the moment the situation is very hard, because there is no agreement with the government about the details. The Serbian authorities are fine with the 130 concerts and events, but they want to ban the march. The problem is not only that now we are in huge delay, but also that many things planned during the week will be affected, if we don’t reach a deal about the march: receptions, openings, participation of governmental officials, big concerts”.

Do you feel the danger for possible attacks of the far-right groups?

Goran: “I’m not afraid, I don’t think there is a threat on safety and security. In the past eight years we had no single incident during Belgrade Pride. We continue to ask the government to tell citizens who is threatening public security: football supporters, extremist and religious groups? For example, most of the people who attend religious processions want EuroPride to be banned, but they don’t support any kind of violence.

And then, if there is a security threat, what have the authorities done so far? We don’t have answers to all these questions, because the government cannot explain so easily why the entire Pride week should be safe, while only a short march should not be”.

Do you think that President Vučic fanned the flames of extremists and somehow legitimated their violence?

Goran: “President Vučić is alpha and omega, he is everything in Serbia. If he says yes to the march, in 15 minutes everything will be solved. If he doesn’t want it, they will find a million ways to hinder it, in a bureaucratic country like Serbia”.

Steve: “I think that Vučić’ comments have created the biggest marketing campaign in Belgrade that we could have ever dreamed of. We have been interviewed by many international media, activists and leaders from all over the world decided to come after his statements. Whether or not Vučić claims that the event is cancelled, the police must protect the marchers, even if it is just a gathering. Also because we are talking about a philosophical question: when does a gathering become a march, when does a march become a parade? And how do you stop people from gathering in a public place?

It is gonna happen, in any case, and international eyes are now on Serbia. Vučić is causing embarrassment to the country globally. For three years the Serbian authorities have known that EuropePride was coming, there is no reason for this to be happening, other than Vučić pandering to far-right nationalists or creating a smokescreen on the domestic issues”.

The power of EuroPride

Is this the first time that EuroPride is hampered by the hosting country’s national authorities?

Steve: “Yes, this is the first time at this political level and with all this obstruction. I think the only comparable occasion was Riga in 2015: there was some political opposition, but not two weeks before the event. Anyway, it was a happy event and this is also a good example for our case. When you look at what happened at the following Prides in Riga in 2018 and 2021, the number of marchers increased and that of protesters massively dropped. EuropePride showed that these people are not dangerous or a threat to families, they are only celebrating and demonstrating for human rights.

I think we will see soon other bids from the Western Balkans’ countries for hosting EuroPride. This event in Belgrade will have a confirming effect and will show the power of Pride”.

In these weeks, the EU institutions have firmly supported EuroPride and put pressure on Serbian authorities.

Goran: “I ask myself what would happen, if we don’t have some kind of reaction from Brussels or any European country. We need strong and clear support, because it concerns freedom of assembly and human rights, as shown by the presence of many MEPs and the Commissioner for Equality, Helena Dalli. The support from the European Union sends a clear message both to the LGBTQ+ community, that they are not asking for something extraordinary, and to the national authorities, that human rights have to be respected everywhere”.

Steve: “The fact that European Union is concerned about things is a well known expression, but sometimes you wonder what it takes to make the EU more than just concerned, and rather bloody angry as it should be. We need some action on the ground, to show that LGBTQ+ rights are something that they stand for. Because these rights are supposed to be a core value of the Union of Equality“.

It is noteworthy that Belgrade will host EuroPride on the 30th anniversary from its foundation and for the first time in the Western Balkans.

Steve: “I think that historically it is very important that the 30th anniversary of EuroPride will be held in Belgrade. When this movement was created in 1992, the civil war in Yugoslavia was underway and no-one could have ever imagined that 30 years later Belgrade would be hosting EuroPride.

This EuroPride is important strategically, politically and economically. Belgrade is famous for its nightlife and the city should become a destination for LGBTQ+ tourists, who will come and spend money. I think we will see many more Prides in the region and more and more international visitors coming to Prides across the Western Balkans. In turn, all of this will have an impact on raising awareness of the situation of LGBTQ+ communities and the steps that still need to be taken. The historical value of this 30th anniversary is not lost for many people”.

And what does EuroPride Belgrade represent for the LGBT+ community in Serbia?

Goran: “This whole situation is tragicomic, in a way. The visibility that we have had for the last weeks is extremely high in Serbia. In national media, everyone is discussing about it and it is very funny that even extremist opponents now accept domestic Pride, but they don’t want LGBTQ+ people from abroad.

It seems a paradox, but the level of acceptance of the LGBTQ+ community is higher than ever, thanks to the EuroPride. We are sending this message: we ca host people safely and we want a celebration of equal rights. This will happen, this will help our fight”. 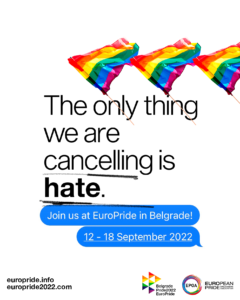