The last analysis of The Langer-Sassoli Project is an insight that captures its essence: from the ruins of the tragic past in the Balkans and Bosnia and Herzegovina, a new project of coexistence can begin not only in the region, but throughout Europe

This is the last analysis of The Langer-Sassoli Project, and now is time to wrap up, recalling the pillars of Alexander Langer‘s and David Sassoli‘s political thought: pacifism, environmentalism, Europeanism and the inclusion of the Balkans in the project of a united Europe. It can be useful to examine the most troubled of the Balkan countries, Bosnia and Herzegovina, and to analyze its relationship with Europe.

During the war between 1992 and 1995, and in the decade – still ongoing – of moving closer to the European Union, handling the Bosnian crises is the most evident case that shows the need for a commitment to integration into a larger political framework, where ethnic and social tensions are dealt. A commitment that both Langer and Sassoli have highlighted, but that is still far from being realized. And the entire Balkan region is facing the consequences. 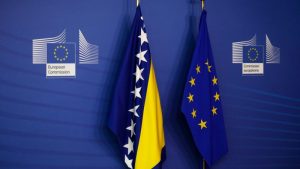 Europe will either die or be reborn in Sarajevo

Alexander Langer‘s last article is dated June 25, 1995, and was published in the monthly magazine L’Europa muore o rinasce a Sarajevo. The title is paradigmatic for the legacy left by the South Tyrolean politician: Europe will either die or be reborn in Sarajevo. “We went to Cannes to demonstrate in front of the presidents and prime ministers on behalf of Bosnia Herzegovina”, Langer told about the European Council on June 26-27, 1995. “Let’s stop all this neutrality between aggressor and victim, let’s open the gates of the European Union to Bosnia, it’s time we changed direction!” 27 years later, these words seem more relevant than ever (even without an ongoing war in the country).

After the demonstration in the square, “we were received by Jacques Chirac in person” (the French President, and President of the Council of the European Union). “In answer to our appeal, Chirac replied that yes, lifting the siege of Sarajevo was a priority, but that there were no good guys or bad guys and that one shouldn’t make war“, was the conversation before the EU leaders’ Summit: “The Belgian Green MEP Magda Aelvoet and I looked at each other, both of us pacifists from way back – how strange that it should be the neo-Gaullist President, who only a few days before had announced the resumption of French nuclear testing in the Pacific, who was practically accusing us of being warmongers!”

Langer’s article details the declaration drafted and signed in May in Tuzla, Bosnia. “After three years all of us, whether humble or powerful, have to look on at a daily life that has been rendered banal by a war in which the targets are women, children and the elderly, victims who have been deliberately targeted by snipers that are out of range or hit by deadly howitzers that fire from out of nowhere”, the document states. “It has taken three years and above all the taking of some UN troops as hostages, an act without precedence in the history of the international community, for the political leadership and the European media to recognize the fact in this war there are both aggressors and those who have been attacked, criminals and their victims”. Three years of “a pointless political ‘neutrality’, which has removed any shred of credibility for us the Bosnians might have had, and any respect there may have been for us in the eyes of the aggressors”, is the denunciation of the “point of no return”.

“Today, more than ever, we have to arm ourselves with dignity and values”, but especially “repeat that “never again” which has resounded throughout Europe since the end of the Second World War”. We often forget that peace in Europe did not last 77 years – until the Russian invasion of Ukraine – but just 46 years, when the Yugoslav Wars broke out in 1991. “Today, more than ever, we have to defend ourselves in Bosnia against those who are pushing for religious or ethnic cleansing as a political ideal, and imposing it by means of crimes against humanity”, because “if our present situation is the result of the disorganized, renunciatory and contradictory policies” of (at that time) 15 European governments, “the European Union has remained silent, impotent and absent“. That is why “Europe should bear witness and react” in Bosnia.

Acting meant “to guarantee the integrity of Bosnian territory and the safety of its borders”. But “to regain the credit which it has largely used up, the European Union now needs to show that it has a degree of courage and political imagination so far without precedence in its history“, the signatories of the Tuzla document wrote. An effort that Europe “can and must do”, because “it is a condition of its rebirth”. This is what was asked to EU leaders in Cannes: not only to reinforce the international presence in Bosnia and Sarajevo, not only to implement UN Security Council resolutions, but above all “to invite the internationally recognized Republic of Bosnia and Herzegovina to become a full member of the European Union immediately“, in the “spirit of solidarity that should animate the Europe”.

“Europe will indeed either die or be reborn in Sarajevo“.

Overcoming the scars of the past

After his last desperate appeal to Europe, Langer chose to take his own life just days before the Srebrenica massacre, when 8,372 Bosnian men were killed by Ratko Mladić’ Bosnian Serb forces. This is one of the most painful scars of the Balkans’ recent past, that the region and the whole Europe is still dealing with. “In Srebrenica 25 years ago an act of genocide and ethnic cleansing was committed, and words cannot describe it“, the European Parliament President, David Sassoli, stated in a video message on July 11, 2020. Ethnic Muslim civilians “lost their lives in the most brutal and unimaginable way”, and the fact that this happened in the heart of Europe “makes it even more horrific and questions everyone’s conscience”. Sassoli’s condemnation was harsh: “It was not only the worst crime since World War II, but also the failure of everyone. We must be deeply ashamed“.

In this collective failure, what all Europeans share is the fact that “the genocide caused deep scars among survivors and created lasting obstacles to reconciliation between political and ethnic groups in Bosnia“, Sassoli recalled. Looking for a way out, the President of the European Parliament drew on Langer’s words – with a different context, but still the same in substance: “We will do everything in our power to prevent these crimes from happening again, that’s why we are committed to the EU enlargement process, not only for Bosnia and Herzegovina, but for all the Western Balkans“. Joining a common project of “cooperation and integration” (which we have already analyzed in one of the previous analysis) can make it possible to “overcome hatred and divisions, to live not only in peace, but to cooperate together”. This is a “promise we must make and try to keep alive”, Sassoli warned. Two years later, nothing has changed, with the 27 EU Member States struggling to keep working the enlargement process in the region.

Even after Sassoli’s death, however, the European Parliament is keeping this hope alive (and part of the credit goes to the strength of his heir, Roberta Metsola). Only a month ago, in Strasbourg, the President of the European Parliament awarded the LUX – European Audience Film Award to the director of the movie Quo Vadis, Aida?, Jasmila Žbanić, and the president of the Association of the Mothers of Srebrenica, Munira Subašić. “It is a call for justice for the women and mothers of Srebrenica, who witnessed the atrocities committed against eight thousand slaughtered loved ones”, President Metsola strongly emphasized during the award ceremony, “No crime against humanity will ever be forgotten in this home of democracy, freedom and European values“. A promise that meets the Bosnian director’s appeal, comparing the conflict in Bosnia in the 1990s and the current war in Ukraine: “Do not forget the countries that are not in the EU, we need your support against nationalisms supported by Vladimir Putin, because you see that after almost 30 years the consequences are still very painful”, are the words that echo in 2022 European Union. But also in 1995 Bosnia.