Before and after the dissolution of Yugoslavia, Alexander Langer and David Sassoli advocated for peace, democracy and the overcoming of divisions in the Western Balkans. A process that continues with the challenges of the European Union enlargement in the region

After weeks of dealing with some of the most important topics for Alexander Langer and David Sassoli, this project finally analyzes the relationship between the European Union and the Western Balkans, both at the time of the Yugoslav Wars and of the ongoing process of the EU enlargement. This comparison gives an insight on the lessons learnt from the Balkan troubled past and on the obstacles to the integration of the ‘black hole’ of Europe. But also on the burdens for overcoming divisions and nationalistic disputes, which would find a solution in the broader framework of an European political, cultural, social and economic integration. 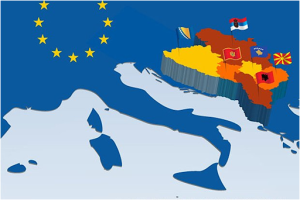 February 1993. While wars ware raging in the Balkan region and crimes against humanity and ethnic cleansing happened daily in Bosnia and Herzegovina, on Kommune Alexander Langer analyzed the situation the former Yugoslavia, in an almost prophetic way: Yugoslav Lessons. “The dreadful Yugoslav war is increasingly revealing itself as the decisive challenge to the European consciousness and the testing ground of the new Europe“, because “one day, its historical significance will perhaps be considered greater than the Spanish Civil War in the 1930s”. The most interesting analysis is not on the deflagration of ethnic conflicts, but rather on the characteristics that social forces “inside and outside” the region should have “to help prevent or resolve the conflicts”.

“In an ethnic conflict (national, racial, religious) there can be no just solution for only one side, the resolution of the conflict is possible only through joint or at least convergent initiatives of different parties”, where “inter-ethnic groups represent the only realistic approach“. Whether it is Yugoslavia, “Israel/Palestine, South Africa… or South Tyrol”, its belonging requires “a certain degree of ‘betrayal’ (however, it is not switching to the other side!) and at the same time of ethnic rooting“, the South Tyrolean politician explained, echoing some elements already seen in the Civil Peace Corps: “The roads to peace can only be opened by people and groups who are still recognized in some way by the side to which they belong, but who are also capable of rowing against nationalistic current“.

Forces of this kind “have no easy life in former Yugoslavia”, also considering that “Europe – whoever we to refer to, using this expression – has practically abandoned them”, even if their existence “is and was known”. Interethnic forces “should have been involved early in peace talks”, while “groups, parties and newspapers less nationalist needed political and material support, to gain weight and prestige” in their respective societies. The “other” Serbia – “which has always re-emerged with initiatives and demonstrations” – the “other” Croatia – “which has not been silenced” – were left “completely alone”.

This is how, in the early Nineties, Europe was facing with the “ruins not only of former Yugoslavia, but of its own ability to act”. Everything we now consider History (“the horrific war crimes, systematic discrimination, intimidation, expulsions, rape, imprisonment, torture and murder of tens and hundreds of thousands of people”), in 1993 already caused “a fire that can no longer be wiped out, and wounds that will remain for generations“. Langer wondered if at some point in the past “the Gordian knot of coexistence” might have been untied, but in the end it mattered little: “If today it is cut with the sword and the Serbian leadership will be forced to stop, the result may be a temporary end to the terrible war that is going on. But reconstruction will be a long, long road“.

The importance of the EU enlargement

“Having a peaceful, stable and prosperous continent would immensely benefit all European citizens”. Nearly 30 years after Langer’s writings – and with all the legacy of the 10 years of war in the Balkans – the former President of the European Parliament, David Sassoli, showed the importance of integrating the Western Balkans in the European Union. On the eve of the EU-Western Balkans Summit in Kranj (Slovenia) on October 6, 2021, the President of the European Parliament sent a letter to the President of the EU Council, Charles Michel, explaining the reasons to accelerate a decade-long process: “This new impetus can only have a positive effect in the region and could contribute to its democratic transformation and to good neighborly relations“.

Delays, vetos, tactical wait-and-see policy and “any further hesitation” risks “encouraging others who wish to gain influence in the region”, Sassoli warned, while keeping his attention on the first concrete danger: “A failure in keeping promises made to the Balkan partners would mean betraying citizens’ hopes“. Even if the starting point is the “fulfillment of accession criteria” – which remain “the light that guides the way for each country on the path towards accession” – it is indisputable that a “truly geopolitical Europe” can only be set “with our closest friends, who share the same cultural and historical European identity”.

The friends are precisely the Western Balkans, which can continue the process of overcoming regional divisions and European integration thanks to their Parliaments – “way to peace and democracy“. At the European Parliament – Western Balkans Speakers’ Summit in 2021, Sassoli addressed his colleagues, urging them to work together toward “a common European future”. In their role of “inclusive spaces of dialogue and exchange of views, Parliaments can foster mutual understanding and reconciliation in the Western Balkans“, in order to “directly contributing to peace, stability, prosperity and stronger democracy in the region”. Considering that “enlargement remains more than ever a geostrategic investment in a stable, strong, and united Europe” (and closing the loop drawn by MEP Langer), President Sassoli promised that “the European Parliament will remain a committed partner towards a common European future“, to put an end to all conflict in the Western Balkans and to grant the EU membership to the entire region: “It means hope, for all sides!”.

Farewell, David Sassoli, the President who cared about the European future of the Western Balkans