Fahrije Hoti, entrepreneur from Kosovo, leads a cooperative producing ajvar, the typical Balkan condiment. Most of all, this business is a place of hope for women and war widows like her

There is little doubt that if you have to indicate the lowest common denominator for all the Western Balkans, from Kosovo to Serbia, from North Macedonia to Croatia, the answer stands in five letters: ajvar. This is the most typical Balkan food, which each country claims as its own invention: a spread whose main ingredient is peppers, to be eaten on bread or to flavor meat and ćevapčići.

But in the Balkans, ajvar is more than a condiment. It is an identity element, a visceral connection to territory, tradition and culture. In some cases it can also represent personal healing. For a woman, for a war widow. This is how the story of Fahrije Hoti and her Kooperativa Bujqësore ‘KB KRUSHA’ begins. A company that produces ajvar, peppers and pickled peppers in Krushë e Madhe, in Kosovo. Hoti is 52 years old, a mother of two children and grandmother of two granddaughters. And she is the wife of a missing husband during the war in Kosovo. More precisely, since March 25, 1999, the day of the massacres in Krushë and Madhe.

After the war, she wanted simply to start living again. But in her own way, not according to social diktats, which would require her to stay home and think only of childcare. Nearly 20 years later, she runs a cooperative that employs 50 other women, most of them with similar backgrounds and psychological wounds. Furthermore, she has become a business and human reference point for an entire country. Not only she won the 2022 European of the Year award in Kosovo, but her story was also the inspiration source for the Albanian-Kosovar movie Hive, that entered the 2022 Oscars shortlist for best international feature.

Fahrije, where did you find the strength to start this activity?

“Well, this activity is related to what I, as other women, did before the war. My family was mainly engaged in farming and cultivating peppers. After the war, when we returned to Kosovo from Albania – where we were refugees – our emotional and economic situation was at the lowest level: our houses were burned, men were missing and we had to take care of little children. So, I decided to be the first woman to establish an NGO, Widow Women, in 2003. I tried to do as much as possible for the fate of families of people killed or missing during the war in Kosovo.

I also dealt with beekeeping, selling the honey at the local market by myself, in order to provide income for my family and my children. However, I noted the interest for pickles and home-made ajvar, when people visited the NGO office, and for this reason I started producing ajvar in small quantities and selling it. The interest for the women of Krushë’s products continued growing, so I decided to call for some more widows from the village to join this production. It was in 2005 that we officially started this activity as a business. Since I got the driving license, we added the distribution of all our local products”.

How has this activity changed over time?

“It has grown day by day, together with the interest for our products. I started on my own, but already in 2006, we were five women. Also the sales grew year by year in the local market. In 2014, for the first time, we decided to export our products to Switzerland [where most of the Kosovar diaspora live, ndr]. After one year, not only the production capacity and the labor force increased, but also exports to other European countries. Nowadays, KB KRUSHA meets the demand of both the domestic market and the export market to Switzerland,Italy, France, Switzerland, Germany, Austria, Benelux and the United States. And currently, our cooperative provides jobs to 50 active workers. The total amount goes up to 100, since we also employ seasonal workers”.

Read also: The pride of Kosovo in a goal celebration during the 2018 FIFA World Cup

What is the greatest satisfaction and the biggest difficulty you have faced in all these years?

“The greatest satisfaction during these years is being able to become self-employed, to integrate in the business world, to provide good living conditions for my children and to educate them. But also to involve other women, widows or non-widows, in the work activities, to heal together the bitter memories of the war and to move on with life.

On the other hand, I experienced the biggest difficulties in the first years of this activity. Like other women and widows, I personally faced the patriarchal system and the discrimination against women in doing business. But the desire to work and to provide income for the family gave me strength to continue and not surrendering to anyone. Gradually, over the years, these barriers were overcome and, together with the other women, we have managed to achieve our goals”. 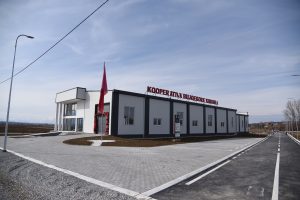 Fighting the patriarchy, healing the past

What does it mean to run such a business, as a woman and a war widow?

“As a widow who started a small business from scratch, many expected from me to stay home. It is normal that the beginning of an activity is not easy. However, I experienced a different treatment from men in doing the same job. At the same time, we received support from other groups of women, different governmental organizations and NGOs.

In life, everyone experiences something that knock them down. But I say that we must not give up, move forward and achieve our goals. Running a business as a widow in a village in Kosovo means that you have to face the obstacles along your way, while becoming the inspiration and motivation for other women and girls who want to enter or are already in business”.

Hive was sadly not nominated for the Oscars but we are incredibly proud of how far they have come! What an achievement, what a statement, and what a demonstration of the talent & ambition that 🇽🇰 possesses. The women of Krusha, @Blertabb& the team – you are an inspiration.

How did this activity help you and your employees to mentally cope with the past?

“This activity run by women is not only profitable, but for most of the workers it is also an institution for their psychological relief. Because in this company, we spend a very good time with each other and we share out history and pain. No matter how much you are stressed, there are moments when the memories of the war come back to you. But here, in Kooperativa Bujqësore, we laugh, we put some music on and dance. We help each other relieve mental suffering”.

How do you think you and the other widows would have dealt with the aftermath of the war without this cooperative?

“Through this activity, we managed to go out of our homes, have new experiences and learn a job. And we also have a reason to live, to move on despite the pain and the memories of the war, that we will never forget. If the cooperative did not exist, most women would be passive, without any income, and boredom would dominate their lives. They would struggle with raising and educating their children, while remembering only the terrible moments of the war“. 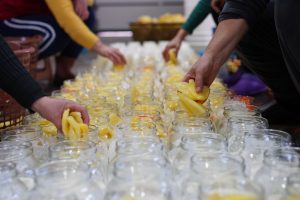 Behind a jar of ajvar

So, how does this cooperative work?

“Well, we were a cooperative from 2005 to 2016. Then, we turned it into a company, because, as a cooperative, we were not eligible for loans and grants. However, we decided not to change the name, keeping Kooperativa Bujqësore ‘KB KRUSHA’. The company employs 50 workers: 90 per cent are women and most of them are war widows. We also provide work to young girls, who need financial support for their education during the holidays months.

Last year, the company based in Kosovo produced approximately 1.2 tons of peppers, avjar and pickled peppers. The production of ajvar is seasonal, as the proper peppers ripen from the end of August to October. During this period of the year we focus on this production, since it is our main brand: we prepare about 1000 to 2000 jars of ajvar per day“. 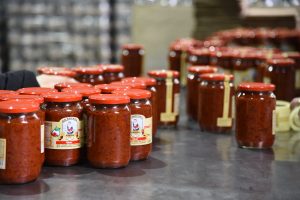 What are the future projects for the company?

“We were lucky enough to win a grant of the European Commission in Kosovo in 2020, for the construction of a facility that met European standards. Now, we are carrying out our activities in the new factory, funded together with the EU Commission. Our plans for the future are to increase the production, bring new products to the markets and expand the business activity by creating new job opportunities for women, girls and boys. At the same time, we have to maintain high levels of quality”.

The very last question, which is very personal. What does ajvar mean to you?

“I think that everyone has a starting point, a kind of sign that helps to get on with life. For me, it was ajvar. When I began producing it, I entered the business world and I started learning new things and get motivated. Ajvar remains our main product, the brand of our company. Starting with the very beginning of its preparation until the bottling, I follow every stage of ajvar production. I’m still active”.

I congratulate @FahrijeHotifor winning 2022 European of the Year award and thank @KonjufcaGlaukfor his speech and all 🇪🇺 friends & partners for joining us @ the #EuropeDayreception. My full address 👉bit.ly/3wdsdbD🇪🇺#ForYouWithYou🇽🇰