Environmental protection and peace are an inseparable combination, threatened by climate change and wars caused by human being. The only viable solution is to give voice to peace defenders and environmental defenders, joining forces together, as Alexander Langer and David Sassoli asked

There is a close relationship between environmental protection and peace, more than we can imagine. Wars and climate change affect the most especially the poorest people, enriching those who already own huge assets. Wars and climate change accelerate the crisis on the planet that hosts us, draining resources and forcing millions of people to leave their homes in search of less hostile places. Wars and climate change intersect in the ever-present nuclear threat, which – if it were to materialize – would cause the extinction of humankind and the natural habitat, as we know it.

For this reason, defenders of peace and environmental defenders – despite the fact that they may seem to struggle against overpowering forces – are key-players in creating a barrier against a world adrift. And the two protagonists of this journey, Alexander Langer and David Sassoli, show us that there is no peace without environmental protection, and vice versa. 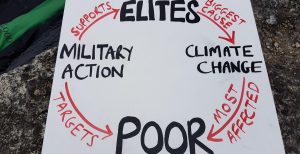 At the very end of the Eighties, the politician, activist and environmentalist Alexander Langer drew a clear connection between environmental protection and peace. In an article for Azione nonviolenta Action, Langer started from a very simple issue: “It is difficult to say whether peace movements have ever achieved anything. While the usefulness of firefighters can be deduced from the number of fires put out, the usefulness of pacifists is more complicated to measure”. If we consider “recent conflicts, we would be discouraged about concrete results”, especially when we think about the crucial question: “How can pacifists hope to face the incomparably superior forces exerted by the economic and political interests that drive wars?”

Here is the “first and strong, even troubling” analogy between peace defenders and environmental defenders: “Looking at the reasons for the short term, they seem to be vague and losing. They both ask to give up an apparent but immediate advantage“. Better now than never. “The reasons of the long term are in favor of pacifists and ecologists, but no one trusts them immediately”, Langer emphasized. He stressed the request to “renounce possible military and technological superiority” in order to concretely achieve peace, as well as the demand to avoid practices harmful to the environment, that answer “the hope of producing more and better than the others”. These are “disadvantageous and suicidal” ways of reasoning.

This is why there is a practical need to find a way “to strengthen the reasons of the long term against the reasons of the short term”. Neither “the fear of war, nor the ecological catastrophe”, nor utopia, “which risks being used only during solemn occasions”, is sufficient. The aim is “to make peace attractive and convincing: peace among men and peace with nature”, defeating a “short-sighted and voracious” way of thinking that rewards “those who can transform ploughs into swords and water into gold, not vice versa”. Where to start? From the individuals, from ethics that shapes personal behavior and pushes each person to act by conviction: “Being free from war, from militarism, from ecological destruction, from the looming civil or military apocalypse”, wrote Langer, “it must be clear to everyone that it is also a matter of quality of life“.

In other words, “the cause of peace can no longer be separated from the cause of ecology” and environmental protection, “just as it cannot be separated from the cause of justice and solidarity among peoples”. For this reason, “peace movements must have some new characteristics”, showing the connection between “big and small choices”. Because “we are all war profiteers”, as long as “our current way of life – from consumption to armaments, from productive competition to intellectual competition – imposes a very high level of conflict and violence”. Discovering this connection and promoting behaviors to reduce violence and protect nature will have to become “part of a new and great sensibility“, even for the personal benefit of people who live on the more fortunate side of the planet: “The weakest succumb first, but soon everyone is hit by the boomerang effects of destruction”. 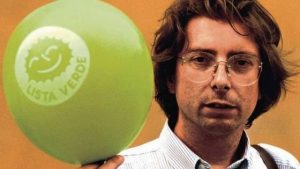 “We must be brave”

Awareness, interdependence, change. Fundamental values also for the former President of the European Parliament, David Sassoli, in drawing a link between peace, environmental protection and social justice. In his message to the Peace and Fraternity March Perugia-Assisi on October 10, 2021 – “an extraordinary testimony of hope and at the same time a place of collective responsibility” – Sassoli started from the need to “rediscover the importance of human relations” in the aftermath of the first months marked by the COVID-19 pandemic. “This time taught us that everything is connected and it is not possible to face the emergencies alone“.

The first declination is for “peace builder”, which practically means “committing to reduce the inequalities that persist in our societies” and “investing in the community”. All this allowed the European Union to “experience peace and cooperation and to build a model that has favored progress in social and civil rights”. However, “the absence of war is not enough, Europe must prove itself capable of becoming an instrument of peace, a project for the well-being of all”, as Sassoli reiterated on several occasions. “We must decline all this in concrete initiatives”, because “if migrants continue to drown in the Mediterranean, refugees to be rejected, children to die for lack of care, how could we say that this unique space of freedom and democracy is a useful model for a more just world?”

This challenge involves not only the effort for peace, but also the struggle to protect the environment. “We must be brave, it is in the interest of our citizens to strengthen together“, Sassoli stressed, referring to the “ecological transformation that will profoundly change our lifestyles”. It is neither conceivable nor feasible “to build a more equal society if we do not repair the damage we have caused to the planet and to the environment in which we live“. There is no going back. “Thanks to young people and to all those who remind us every day of our responsibilities” on climate change and on the exploitation of natural resources, the former President of the European Parliament added. People must be at the heart of the debate on the common good, “which belongs to everyone” and which must “leave new generations a fair and more sustainable future”. 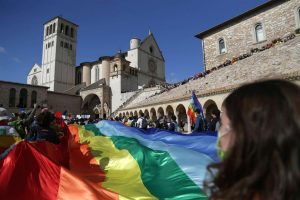