Orange wines are becoming popular as new environmental-friendly products, but have their roots in a millenary tradition. On April 29, a specific festival will be held in Slovenia, the Orange Wine Festival Izola

In the center of the bar there is a bottle. We can see an amber liquid inside and, as we open the bootle, a floral scent is released in the air. It is a very peculiar wine, that it is convincing more and more winemakers, experts and consumers. Welcome to the world of orange wines.

The orange wines are produced with white berried grapes, but vinified like red berried grapes. It means that the must stays in contact with skins for a certain period of time, in a process called maceration. The process can last few days or even months and it is spontaneous: the wine ages in barrels without any chemical additive and often it is not filtered before bottling. In this way, thanks to the maceration of white berried grapes, it is possible to obtain a wine which is different in visual, olfactory and tactile aspects from both red and white wines. 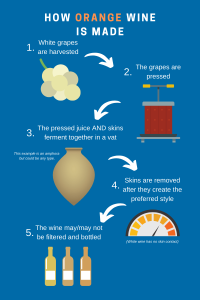 The orange wines are tannic – the more they are aged – and characterized by a higher complexity and structure than white and rosé wines, because of the higher level of tannins. At the same time, they do not lose the typical crispness of white grapes. The aroma is fruity and floral, the color – obviously – is orange, with amber shades according to the structure and the aging in oak barrels. Considering the duration of maceration and to the grape variety, orange wines can be very different one from each other. The best matchings are with typical dishes of the Adriatic and Eastern cuisines, from meat (even spicy) to fish.

This kind of wine making has ancient, peasant origins. It risked to disappear with the advent of cellar machinery, that allow the immediate removal of grape skins. According to experts, the motherland of orange wines is Georgia, where they would have originated thousands of years ago thanks to the maceration in kwevri, earthenware jars similar to amphorae. But also in the Italian North-East and in the Adriatic-Balkan region countrysides there is a strong peasant tradition of leaving the white grapes must to macerate with the grape skins. Even if they are still niche products, from these territories orange wines are getting popular in new European markets in the last years.

The reason is linked to the relationship between orange wines and the issue of environmental ecology. Orange wines are often produced following organic methods or biodynamic principles, with a limited use of chemicals. Because everything that is on the skin, in one way or another, thanks to the maceration process can be later found in the wine. The most suitable grape varieties for this type of production are the Italian/Slovenian ribolla gialla, the Istrian Malvasia and the Georgian rkatsiteli and mtsvane.

Italy, Slovenia, Croatia, Austria, Serbia, Georgia, Greece. Orange wines are spreading in many European wine regions. However, the country that is becoming the homeland of orange wines is Slovenia. This production method has a long history in the country, but it almost disappeared during the 20th century, in particular when Slovenia was absorbed in Yugoslavia. After the Second World War, the Socialist Republic of Slovenia (part of Tito’s Federation) imposed to winemakers the delivery of grape harvests to State cooperatives, which preferred the production of white wine through new technologies.

This is why the traditional process of maceration fell into oblivion. We have to go back to the Eighties to trace the origins of its rediscovery. In the Vipava Valley and in the Primorska wine region, many Istrian winemakers started to dedicate themselves again to the maceration of white berried grapes. The rediscovery of orange wines continued in the following decades, even if the real increase in popularity happened in the last 10 years. The demand is growing year by year and nowadays the production is spread in three wine regions: Primorska (Littoral), Posavje (South-East) and Podravje (North-East).

From few producers who started producing orange wines professionally in the Nineties, there are now about 60 winemakers in Slovenia. At the 54th Vinitaly edition – the International wine and spirits exhibition – some of these winemakers from different European countries presented their orange wines. The event in Verona was the occasion to have a preview of an important appointment in this expanding niche: the Orange Wine Festival Izola, in Slovenia.

An entire festival dedicated only to orange wines, which will be held next April 29 and that will celebrate this year the 10th anniversary of its foundation. It does not matter if you come from a traditional wine region or a new one, the doors of the Orange Wine Festival are open to all winemakers. As long as certain rules are respected: natural cultivation and production techniques, long maceration, spontaneous fermentation, as little intervention as possible in the cellar and low sulfite content.

New protagonists are expected at the 2022 edition, as more and more young winemakers are choosing to rediscover their parents’ and grandparents’ traditions, combining a new attention for the environment. The presentation of their wines will be accompanied by the tasting of typical products of local restaurateurs, who share the same philosophy of approaching carefully to nature. And everything will be filtered by the orange lens of orange wines.

The taster has the floor

Marco Vassallo, friend and journalist for Corriere – Cook, at the beginning of April participated in the Vinitaly masterclass dedicated to orange wines and had the chance to directly approach this world (here is his review). And BarBalkans is happy to welcome him as a symbolic host behind our bar, to tell us his point of view and his experience in contact with these products.

Marco, you have the floor.

“The first Orange Wine Festival was held in 2012. And in the last few years these wines have been growing, not only for the taste – which makes them completely different from regular white wines – but also because there is an ethical and philosophical issue inside the bottle. Producers try to communicate that having a piece of land and taking care of it means, first of all, the ecosystem and biodiversity conservation.

Wine is just a part of a harmonic process, which involves the relationship between the human being and the territory. The winemakers I met at the masterclass were people who looked like they had just come out of the vineyard, their hands still dirty with its soil. Genuine farmers and winemakers. I believe this is appreciated by new generations”. 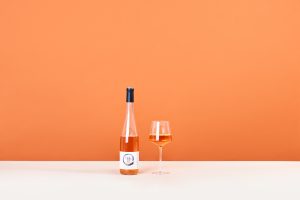