The European Union is becoming an agent of peace on the international arena, through clear political messages and demonstrations of tangible support for Ukraine, invaded by Russia. The geopolitical transformation responds to Alexander Langer’s past requests and materializes through David Sassoli’s heir

Peace, army, war crimes. In these weeks, the Langer-Sassoli Project has focused on Russian invasion of Ukraine, with several considerations starting from the thought of the two protagonists of this Project, Alexander Langer and David Sassoli. These considerations come from old experiences, but still have a reflection on the contingent situation of present days. Something theoretical, but more than ever incisive also on a practical level, that can be done on another topic: the role of the European Union as an agent of peace. An interesting experiment, considering that it starts from a parliamentary act by Langer and develops with a powerful and concrete action by the institutional heir of former President Sassoli.

Where is the Europe of peace?

The definition of the European Union as an agent of peace begins on January 23, 1991, with Langer’s speech at the plenary session of the European Parliament in Strasbourg. “Every community, every aggregation is characterized essentially by the goals it sets and the challenges responded“, the politician from Vipiteno/Sterzing stressed, referring to the war in Iraq. “Our Community has not been able to make its breakthrough with a common peace policy”, stuck in a war “where some members are zealously aligned with the United States and some others essentially eclipsed”.

The main problem has been the “lack of a common foreign policy outlining a firm but peaceful protagonist, with his own proposals and initiatives”. Considering this absolute absence, “how can we be surprised if the Arab peoples and countries, moderate or radical, nor Israel, nor the United States recognize in the Community an autonomous, strong and therefore credible actor?” The answer cannot be in militarization, in “winning the stripes on the battlefield”, while, at the same time, “we have not been able to develop the political and democratic quality of the Community”.

Almost disconsolate, Langer said that “there is, but perhaps we should now say ‘there was’, a strong need for Europe, coming from our peoples”. A need for a “different and autonomous” Europe, not opponent of the United States, but not even surrendering to its choices: “A subordinate warring Europe will not be able to effectively contribute to a new international order”. Unless, from now on, “we entrust this prospect to the arms”, rather than pushing with all energies for “a just and convincing international order”. 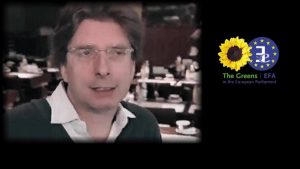 There was, but perhaps we should now say ‘there is’, a strong need for Europe. The former pPresident of the Europea Parliament Sassoli explained well how the EU peace project was worth spending all the efforts to protect it, even at the cost of being banned by an illiberal and autocratic State like Vladimir Putin‘s Russia. Sassoli did not see this war break out, but no one has any doubt about the stances and actions he would have taken. The baton was picked up by his institutional heir and successor to as leader EHof the European Parliament, Roberta Metsola, with a courage that embodies every value President Sassoli stood for.

On Friday, April 1, the President of the European Parliament visited Kiev in person, despite all the risks of a trip in the Ukrainian territory invaded by the Russian army since February 24. Metsola was the first EU high institutional office – emulated only on the following Friday (April 8) by Ursula von der Leyen and Josep Borrell – to bring a message of solidarity with the Ukrainian people, of support against EU against and an attempt to resolve the war through a diplomatic effort and peace. A dangerous trip, considering how a high EU office can be in a territory of war, but motivated by the fact that “it was necessary to physically bring our message and show that we are at their side in these dark times”, Metsola explained to MEPs in plenary in Strasbourg. Something “meaningful for the Ukrainians, who are fighting for our values, in the most impossible conditions”.

Three promises. This was what President Metsola brought with her own to Kiev. “I am here because the whole European Union is with you and supports your struggle, your aspiration for membership and the reconstruction of your country after the war” . The promises are now irreversible, a “message of hope” pronounced where Metsola risked her own life to express all the need to silence the weapons in order to start again with a new peace project. A “testament for parliamentary democracies and fundamental rights”, declined in the three commitments. “We will not abandon you in your struggle against Vladimir Putin‘s criminal invasion”, Metsola stated, promising that the EU will commit to “rebuild your country when the war is over” and to help “Ukrainian citizens who have found refuge in the Union return to their homes”. And finally, in the EU peace project there is also room for Ukraine: “We recognize your aspirations for membership and you can count on us to achieve it“.

With @ZelenskyyUa in Kyiv 🇺🇦