On April 3, Serbia will go to the (triple) vote, in a tense atmosphere and on the same day of the crucial general elections in Viktor Orbán’s Hungary, a historical Belgrade’s ally within the EU

April 3 will be a crucial day the recent history of Serbia: not one, but three elections will be held in the country. The presidential election, the early parliamentary general election and the local elections (including in Belgrade). In an atmosphere characterized by political and social tension, Serbian voters will express their votes for the maintenance or the change of institutional balances. With all the polemics, scandals and low blows. Beyond the borders, also in neighboring Hungary, April 3 will be a Super Sunday. However it goes, a new political chapter will begin on April 4. For Serbia, for Hungary, for the Balkans. And for Europe. 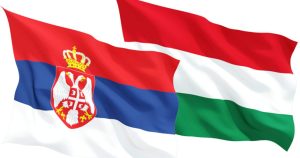 On April 3, Serbia will live a decisive political day, with three elections. First, the presidential election. The current populist/conservative President, Aleksandar Vučić, aims for re-election after five years leading the country. The line-up of challengers is somewhat disconcerting: out of seven, four are expression of the radical far-right wing, in addition to one conservative, one centrist and one green candidate. Except for the candidate of ecological left-wing Moramo, Biljana Stojković, the main opposition parties rely on Zdravko Ponoš (candidate of the centrist coalition United Serbia).

Then, the local elections. Voting is taking place in 14 municipalities: Belgrade is undoubtedly the most important. In the capital city, the candidate of the Serbian Progressive Party (the same as President Vučić), Aleksandar Šapić, and of United Serbia, Vladeta Janković, will go head-to-head. The third opponent is Dobrica Veselinović (Moramo), who will try to capitalize his decade-long activism in the city.

And finally, the parliamentary general election. It will be held two years after the boycott by the opposition parties of the 2020 elections, for the allegations against President Vučić of illiberal policies towards civil society and press freedom. Since 2020, the Serbian Progressive Party has been ruling the country with a majority of 188 deputies out of 250. But skepticism of international partners on the country’s compliance with democratic standards forced early elections. There are 18 lists running for a seat in the National Assembly. According to the polls, the Serbian Progressive Party would win with over 50 per cent of votes.

The electoral campaign was characterized by familiar issues (EU membership, relations with Kosovo, NATO), apparently new (ties with Russia, following the invasion of Ukraine), or widely attended: environmental protection and the fight against land exploitation. On the eve of the elections, an EP delegation headed by Thijs Reuten went to Serbia, as part of the International Election Observation mission.

The elections in Serbia follow a “dirty” electoral campaign, from several points of view. First of all, because of the usual controversy over the polling stations in Kosovo. As Serbia does not recognize Kosovo as a sovereign State, Belgrade wanted Pristina to grant the possibility for Kosovo citizens to vote for elections in Serbia (as already happened in the past with the support of OSCE). The Prime Minister Albin Kurti and President Vjosa Osmani opposed to the request, considering it a violation of Kosovo sovereignty (and annoying Brussels for the “unnecessary tension”, as the EU Commission said). As already happened on the occasion of the Serbian constitutional referendum on January 16, Serbs of Kosovo will be able to vote by mail or at the Mission of Serbia in Pristina. However, the government in Belgrade decided to open several polling stations in some cities of southern Serbia only for them.

Another big issue in Serbia, which affected the electoral campaign, is the discrimination of minorities and threats to media pluralism. According to Amnesty International’s 2021 report on the respect of human rights worldwide, independent journalists, NGOs, members of the LGBT+ community, Roma and other minorities are frequently attacked by local authorities and pro-government media in Serbia (through defamations and lawsuits). Not to mention the abuse of power by the police and the impunity granted to war criminals. One of the most critical issues of 2022 elections in Serbia. 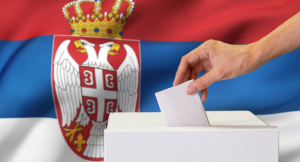 In 2022, Serbian war criminals are campaigning and running for local and parliamentary general elections, mostly in support of the Serbian Progressive Party. Veselin Šljivančanin, former officer sentenced to 10 years in prison for the genocide of 260 civilians in the Croatian War. Nikola Šainović, Prime Minister in 1993 sentenced to 18 years for deportations in the Kosovo War. Vladimir Lazarević, former general sentenced to 14 years for murders of Albanian civilians in Kosovo.

But above all, ultranationalist Vojislav Šešelj, leader of the Serbian Radical Party, sentenced to 10 years by the International Residual Mechanism for Criminal Tribunals in The Hague for war crimes against Croatian civilians in the village of Hrtkovci in 1992. According to Serbian law, if a Member of the Parliament is sentenced to more than six months in prison, their term of office immediately ceases and cannot be re-elected. But the measure has never been applied in Šešelj’s case. To avert the risk of a second round in the presidential election, the war criminal and leader of the Serbian Radical Party called on his voters to choose Vučić (who left the party in 2008 and founded his Serbian Progressive Party). To make things worse, Šešelj and his party politically support Vladimir Putin’s war in Ukraine.

Read also: The Balkan foreign fighters who are leaving for the war in Ukraine

This is the last of the most controversial issues of Serbian electoral campaign. Since Russia began the invasion of Ukraine on February 24, almost no party in Serbia has openly condemned Kremlin’s decisions. Only few, brief, unpolarized statements. Except for the far-right parties, completely aligned with Moscow. The liberals of the Free Citizens Movement condemned the military aggression. Moramo sent a message of solidarity to Ukrainian people and Belgrade’s candidate Veselinović pushed for “anti-militarism, pacifism and a European shift in our foreign policy”.

United Serbia wants Belgrade to be as little involved in the war as possible, while the ruling Serbian Progressive Party is trying to maintain the neutrality between the Western world and Russia as much as possible. No sanctions against Moscow, but a vote in favor of the UN resolution condemning the violation of Ukrainian sovereignty. However, in the governing coalition, the Serbian Socialist Party is closely linked to Russia, considered as a “friendly country, populated by our Orthodox brothers, who we will continue to support politically”. These words were pronounced by Ivica Dačić, leader of the Serbian Socialist Party, following the Russian invasion of Ukraine. He (and his party) sees the Kremlin as the most influential defender of Serbian national interests on the international scene.

Russia is not the only international partner Serbia is looking at. April 3 also marks a decisive date for Belgrade’s (or rather, President Vučić’) greatest ally in the EU. Viktor Orbán’s Hungary. Like Serbian President Vučić, Hungarian Prime Minister Orbán is also aiming for re-election (the third consecutive), after 12 years of power without interruption. Despite ideological differences, the six opposition parties (from the nationalist right-wing to the socialists) are united against the ruling Fidesz party’s system of government. The common candidate is the conservative economist Péter Márki-Zay, who promised battle against the “criminal system that has been in place for 12 years”.

On the eve of the vote, polls confirm a head-to-head, but Prime Minister Orbán’s party is ahead: 50 percent of voting intentions, against 45 percent expressed for the political forces led by Márki-Zay. Orbán’s Hungary also shows shortcomings on press freedom and minority rights. As shown by the consultation on the anti-LGBT+ referendum, to be held on the same day. In Hungary, as in Serbia, it will be a historic showdown on multiple points of view. 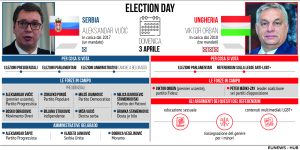 The two nationalist leaders are bound by mutual personal esteem and a particularly close political relationship. The Serbian President considers the Hungarian Prime Minister a role model within the EU: “He is a veteran of European politics”, Vučić stated in a meeting last year. On the other hand, there is a strong interest in having a like-minded ally in the Western Balkans, given the EU enlargement in the region and the potential range of influence for Budapest. It is no coincidence that Orbán compared Belgrade’s role for the stability of the Western Balkans to Poland’s role (as a close ally) in Central Europe: “It is more in the interest of the EU to include Serbia, than in the interest of Belgrade to join the Union”. Vučić appreciated: “Many countries expressed their support to Serbia’s path towards the EU, but few are so open and courageous like you, willing to take criticism in Brussels”.

In Hungary and in Serbia, everything is ready for the April 3 elections. A day that will mark a point of no return for the domestic political future of the two countries. But also for the wind – of nationalism or of change – that will blow on the EU enlargement process in the Western Balkans.