Indiscriminate bombings and human rights violations. The war in Ukraine wanted by Vladimir Putin shows many similar features with the two conflicts in Chechnya. This past is still reflected in the present days, considering repression and violence in the Republic, that has personally involved Alexander Langer and David Sassoli

Bombs on houses, hospitals, schools, theaters. Devastation, truces violated and humanitarian corridors not respected, innocent civilians killed. The images and the testimonies coming from Ukraine give back all the tragedy taking place in a country attacked by a foreign army. What Russia is doing in Ukraine, however, has a precedent, even if on a smaller scale: in Chechnya, Vladimir Putin’s regime has already put in place systematic violations of the rules of war, with disregard for human rights and the lives of innocent civilians. A drama that crossed the lives of the two protagonists of this Project, Alexander Langer and David Sassoli.

“First of all, what is Chechnya?” In an article published on March 1, 1995, on the magazine Mosaico di Pace, Langer explained what had been happening for almost four years in the secessionist Republic. In 1991, Džochar Dudaev was elected president of the Chechen Republic and – following the non-participation in the Russian Federation – called his own elections, not recognized by Moscow. “For reasons that have not yet been clarified, but probably for completely arbitrary and personal interests”, Dudaev dissolved the Chechen Parliament in 1993, and that was the real turning point: “Many deputies followed the opposition, armed clashes occurred withe the support of the Russian secret services’ weapons to the opponents’ groups”, Langer explained.

As confirmed by his sources in the Duma (the Russian Assembly), “the central government made no serious attempt to mediate with Chechen forces”, before attacking the separatist Republic “brutally”. Federal troops “are destroying Chechen settlements house by house”, in a war – the first Chechen war, from 1994 to 1996 – that “arouses indignation and incomprehension for an unprecedented and violent deployment of weapons and deaths”. One year before the end of the fighting, in the capital Groznyj and in the rest of the Republic the toll was 35 thousand dead and more than 150 thousand refugees, “disproportionate to the objective of reimposing state authority”. This was not only “a genocidal operation”, but also “an attempt by the Russian government to destabilize the region and establish its hegemony in Chechnya“. Both in Chechnya and in the Republic of Ingushetia, “brother peoples for language and religion, but also for a common history of oppression and deportations by the Stalinist regime”.

Langer reproached the Western world for the fact that “what prevails is the consideration that all this is an internal affair of the Russian Federation, in the hope that Moscow will conclude this uncomfortable and disgusting spectacle as soon as possible”. It was true then for Chechnya and in a certain sense it is true now for Ukraine: “We have to consider the fact that the Russian Federation is above all a product of Soviet decomposition, rather than a clearly identifiable institutional actor”. Even if the country has its won “particular historical and political experience”, at the same time “it has not yet found a new identity of its own” and “this instability in such a vast and important part of the globe is certainly a source of great anxiety for Western diplomacies”. The real problem – never solved in 30 years of State existence – is that “despite all its openness to Western funding and democratic beliefs, Moscow does not seem to have abandoned the infamous Brezhnev doctrine of limited sovereignty, proving to all intents and purposes to be the heir to the Soviet Union”. 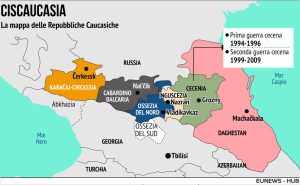 Three years later, Putin’s war machine was set in motion for the very first time. On August 9, 1999, the almost unknown lieutenant colonel and former director of the Federal Security Service of the Russian Federation (successor to the Soviet KGB) was appointed Prime Minister of the Russian Federation. The first decision of the new Prime Minister (less than three weeks after taking office) was a military offensive to regain control of the territories conquered by Chechen separatists after the end of the first war in the region. A month after the beginning of the bombing, in September 1999 Putin declared that “we will pursue terrorists everywhere and when we find them, we will throw them straight into the toilet”. The civilian population was also persecuted, not just the jihadist terrorists.

On October 21, 1999, a missile hit the market in the center of the capital Groznyj, causing the death of 140 people, including women and children. Only a week later, a Russian military aircraft attacked a convoy of Chechen refugees directed towards the Republic of Ingushetia: 25 were killed, including civilians, Red Cross volunteers and journalists. In January 2000, the Russian reprisals resulted in the massacre of Katyr-Yurt, when 170 civilians were killed during the attack on a convoy protected by the white flag. It is estimated between 25 and 50 thousand deaths of innocent people in the ten years of war decided by Putin (1999-2009), but also war crimes, rape and looting by the army and mercenaries hired by Moscow: more than 5 thousand people have disappeared since 1999 in occupied Chechnya.

Later, Putin has carefully designed the transition to a Chechnya subdued to Moscow. And this is where Sassoli’s complaint as President of the European Parliament comes in. In 2007 Ramzan Kadyrov was appointed leader of Chechnya, reviving the Republic from the ruins thanks to funding provided by the federal government and the ruthless suppression of the last breeding ground for uprising. Through his private militia, Kadyrov established an authoritarian regime in Chechnya: which is exactly what Putin would like to do in Ukraine. Son of Akhmad – who abandoned the independence front during the war to ally with Putin’s federal forces – the Chechen leader systematically silences critical voices with kidnappings, torture and summary executions.

Kadyrov declares absolute loyalty to Putin, calling his men “loyal infantry” of the Russian autocrat and sending thousands of Chechen volunteers to Ukraine in support of Kremlin invasion. On the other hand, the Chechen governor represents the essential pawn for stability in Chechnya for Putin: he cannot admit that the solution to the Caucasus crisis  – apparently, a great success of Putin’s presidency – is based only on constant threats and violations of human rights. Today Chechnya massively persecutes LGBT+ people, who suffer torture in secret prisons and violent killings: “There are no homosexuals in Chechnya and if there were, their families would send them to a place with no return”, Kadyrov’s spokesman stated, referring to honor killing.

The European Parliament took a firm stance against these human and LGBT+ rights violations, through a resolution on February 12, 2019. “The authorities, both of the Republic of Chechnya and of the Russian Federation, has to end the persecution of its citizens and the climate of impunity for perpetrators of acts of violence against human rights defenders, their family members, colleagues and supporters”, reads the text. Two years later, in March 2021, the EU decided to impose sanctions against those responsible for these (and new) human rights violations in Chechnya and Russia. As a response, the Kremlin sanctioned the President of the European Parliament and nine other EU public authorities, preventing them from entering Russian territory. “Apparently, I am not welcome at the Kremlin? I ha suspected it a bit. No sanctions or intimidation will stop the European Parliament or me from defending human rights, freedom and democracy“, Sassoli strongly stressed. “Threats will not silence us. As Tolstoy wrote, there is no greatness where there is no truth”, he added. These words that have never lost their relevance for Putin’s Russia, from Chechnya to Ukraine.

Apparently, I'm not welcome at the Kremlin? I had suspected it a bit… No sanctions or intimidation will stop the @Europarl_EN or me from defending human rights, freedom, and democracy. Threats will not silence us. As Tolstoy wrote, there is no greatness where there is no truth.