Two weeks after the beginning of the war in Ukraine and the harsh response of the Western world with sanctions to Russia and weapons for the defense of Kiev, a comparison on the idea and the practical meaning of pacifism, according to Alexander Langer and David Sassoli

In these two weeks of war in Ukraine, there has been much talk about the idea of pacifism, the legitimacy of sending weapons for the defense of Kiev against Russian invasion and how military aggression can be ended, by diplomacy or by force. Pacifism is a complex concept, that is not identical to non-violence and that needs to compromise with practical dynamics of relations among sovereign States. That in some cases can unleash wars without a pretext, besieging cities and killing civilians just for the sake of conquest and power. So we need to understand how self-defense and defense of values can be combined with practices that are not strictly foreseen by theoretical pacifism: the two protagonists of this Project, Alexander Langer and David Sassoli, can help us. 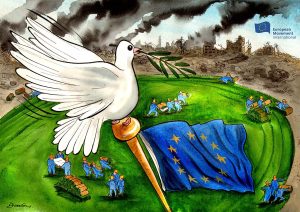 In 2022, we are living and discussing the relationship between pacifism and weapons sending because of the military aggression of Ukraine, in 1993 Langer did the same with the ongoing conflicts in the Western Balkans: this is where the reasoning can start and, like a circle, will end in Sassoli’s thought. “There are people who are scandalized because, talking about Yugoslavia, pacifism seems not to exist“, the South Tyrolean politician and activist wrote almost 30 years ago in the magazine Terra Nuova. If we just replace ‘Yugoslavia’ with ‘Ukraine’, the parallelism is ready. The “scandal” was denounced by two opposing sides: the one that “provocatively” asked why he did not take a stand against the (partial) involvement in the war by the Western world, and the one that “painfully noted that a part of the pacifist field wanted an international intervention to stop the war”. A “political intervention, of course, but with the judicious and targeted use of armed force as well”.

In particular, Langer referred to the ethnic conflict in Bosnia and Herzegovina and lashed out against “simplistic options, good to please fanatics, but unproductive in relation to reality”. He preferred the “tangible pacifism, with tangible partners”, which can give an answer to collective dramas, as only a war can provoke: “Massacres, rapes, deportations and devastations”, but also “deepening the furrow between East and West, between Europeans who can be defended and Europeans who can be quietly slaughtered“. All this “cannot find an answer in the abstract invocation of non-violence”. Pacifists – as much in the Yugoslavian conflict in the Nineties as in the Ukrainian invasion in 2022 – “can be present, with less cheering and less flags, less slogans and less demonstrations, but with an infinite number of visits, exchanges, aid, twinning”. In other words, “a pacifism (finally!) less shouted, but much more solid and tangible“, which means “more complicated, because life is complicated and peace cannot be achieved in simplistic ways”.

However, Langer made a distinction between ethnic conflicts and wars triggered by an external armed intervention (at the time, Iraqi occupation of Kuwait, for example): in the first case, “conciliation is needed, not incitement, and mediation rather than armed support”. Nevertheless, he rejected “dogmatic pacifism”, professed by people who come back from “extreme experiences with the same a priori idea” they had before leaving. In short, those who do not listen to the voices of besieged people, who “desperately ask for help against the aggressors and weapons to defend themselves, if help from outside does not come”. Then, they were Bosnians. Today, they are Ukrainians.

A project for peace

Compared to Langer’s idea, Sassoli’s pacifism is also based on a spotless ideal, concretely connected to the historical events. For example, when he talked about the European army, he said that “we wanted Europe as a union of countries that bet on peace, not on military activities”, but also that “it would be time to have it as a support for foreign policy”. The focal point is what the peace project – the European Union – represents and why it is necessary to fight to defend its values from external attacks.

“We are not an accident of History, but the children and grandchildren of people who found the antidote against nationalism”, the newly appointed President of the European Parliament said on July 3, 2019, during his first speech. “Nationalism becomes ideology and idolatry and creates viruses that stimulate instincts of superiority and disruptive conflicts“. We can easily read a link to the present, on the Eastern front. Day after day, we have to recover the “spirit of Ventotene and the momentum of the Founding Fathers, who were able to put aside the hostilities of war, put an end to the failures of nationalism”, by giving us “a project capable of combining peace, democracy, rights, development and equality“. In a nutshell, the European Union.

Any oppressed European people can aspire to join the peace project of the EU, even more those who are threatened and attacked by the military force of a foreign country. Until a few weeks ago, there was no war and Sassoli could not foresee it, but in 2019 he recognized that “too many have bet on the decline of this project, fueling divisions and conflicts that we thought were a sad reminder of our history”. Tangible pacifism is a daily effort to “defend and promote our founding values of freedom, dignity and solidarity inside and outside the EU“, the former President of the European Parliament stated, underlining that “we must have the strength to relaunch our integration process, changing our Union to make it capable of responding more strongly” to the present challenges.

“Inside and outside the EU”, there are characteristics that make Europeans different – “not better, simply different,” Sassoli stressed – from everyone else. “Let it be clear to everyone that in Europe no government can kill, that the value of the human being and their dignity are the way of measuring our policies“, that in this project “no one can shut the mouth of the opponents”, that “no one can be condemned for their religious, political, philosophical faith”. That with us “girls and boys can travel, study, love without constraints”. But most of all, that “the defense of the life of anyone in danger is a duty established by our Treaties and by the international conventions we have signed”. And this must be put into practice. Pacifism is defense, not aggression, but it calls for action to be tangible.