In the light of Russia’s invasion of Ukraine, some reasoning on the European army, following the considerations of Alexander Langer and David Sassoli

There was absolutely no need for it. On the contrary, we hoped to never see conflicts in Europe again. Instead, with the latest events in Ukraine, the word “war” has broken into the public debate. Years of peace – even if interrupted by some violent episodes on the Eastern front – have not led to any deep reflection at institutional level on the role and transformation of armies, if peacekeeping is really the aim of EU countries’ Constitutions. Maybe it is late, but surely it is never useless to talk about it. That’s why today it makes sense to present the reflections of the two protagonists of this Project, Alexander Langer and David Sassoli, on the European Army, a tool for conflict resolution without bloodshed. 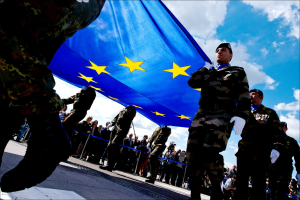 This in-depth analysis of Langer and Sassoli’s considerations on the European army starts from the South Tyrolean politician and activist’s thought, collected in a posthumous document published on Nonviolent Action in October 1995. Starting from the complex experience of the UN blue helmets’ peacekeeping missions, Langer pointed out some of the most important challenges for the armed forces and for foreign policy workers “inside and outside Europe”. In particular, “the potential role of civilians in preventing or managing conflict, which is still greatly underestimated”.

Langer looked with hope at the European Parliament and at the resolution on the EP political priorities for the Intergovernmental Conference (adopted on May 17, 1995). Signed by David Martin and Jean-Louis Bourlanges, the resolution states: “A first step towards a contribution to conflict prevention could be the establishment of an European Civil Peace Corps (including conscientious objectors) with training of monitors, mediators and specialists in conflict resolution”. This precisely reflected Langer’s ideas, which outlined “in a clear and practicable manner” a precise project “to ensure that words are followed by facts”.

“Europe, like the world, is plagued by wars and conflicts”, but “most of them do not occur between States, but within States or regions, and are motivated by ethnic differences, repression of minorities, nationalist tendencies, contested borders”. Even if the concept of sending UN peacekeeping forces to prevent the outbreak of violence, it is “well known” that “recent experiences have not been brilliant”, the politician from Vipiteno/Sterzing writes.

“The Civil Peace Corps would be established by the European Union under the UN auspices”. The EU Member States would contribute to the Corps, with the EU Parliament’s involvement “in all decisions on the establishment and the implementation of operations”. Initially, “it should be made up of a thousand people, 300/400 professionals and 600/700 volunteers” and in every scenario “the volunteers will work under the command of professionals”. Starting from the assumption that “with no funds nothing can be done“, the EU is entrusted with the task of defining “budget lines for salaries and operating costs”.

Participants in the Civil Peace Corps could be “largely” conscientious objectors, but also retired peacekeepers and diplomats. A “particular attention” should be given to refugees and exiles from the region where the conflict has to be managed: “Many of these people are educated and non-violent, with a great knowledge of the local situation” and they play “a key role in language support”, Langer emphasizes. In general, the Corps “should be composed of individuals of different nationalities”, both men and women between 20 and 80 years old. The required qualities required are: tolerance, resistance to provocation, education in non-violence, propensity for democracy, knowledge of languages, ability to listen and to survive in precarious situations, and patience.

The Civil Peace Corps can work only “as long as the warring parties request their presence in their region“. In case of conflict – in Europe or anywhere in the world – the European Council, the UN General Secretariat and the OECD “can try to convince the parties to request the intervention of these Corps”. Once a request has been made, the international organization can negotiate the conditions, the type of mandate, the period, the financing and the command of the operations. In the absence of an EU structure, leadership in Europe would fall on the OECD, outside on the UN.

“The sooner the Corps is sent to the region, the sooner it can contribute to the prevention of the outbreak of conflicts”. Langer points out that “it has only the strength of non-violent dialogue and trust to be built or restored“. In practice, “it would carry messages from one community to another, negotiate with local authorities, facilitate the return of refugees and try to prevent the destruction of homes, looting and persecution”. On the ground, it would “promote education and combat prejudice and hatred, encourage mutual respect and seek to restore the culture of listening to one another”, using the capacities of “those who are not involved in the conflict”, like elderly people, women and children in the community. It would “never impose anything on the warring parties”, it would denounce those responsible of violence to local and international authorities and would carry out unarmed police services “only on request and temporarily”.

With a good amount of realism (Langer was never blinded by unrealizable utopias), it is well-known that “a Peace Corps operation can fail and no one should be ashamed to admit it“. For example, “if one of the warring parties is determined to continue or escalate the conflict, civilians cannot stop it” and “if the conflict turns into a real war, civilians would flee the battlefield”. The immediate end of operations may happen in several cases: “if fanatics from both sides are no longer under the control of the local authorities and they start shooting at the Peace Corps participants or taking them hostage”, but also “if local media, influenced by local demagogues, undertake campaigns of distrust towards the Peace Corps”. The main issue is that “we forget too often that, to be credible, peace must be visible” and for this reason it must be “promoted by an international policy of reward (and not punishment/sanctions)”. In this way, “if it is made livable, peace will find many supporters in every population”.

Compared to Langer’s very elaborate reflections, the former President of the EU Parliament Sassoli did not always express his own ideas on the European army. However, when he did, the key assumption was clear: “We have said ‘never again’ to war“. This was the central point of an interview on January 31, 2020 for an Italian radio, in which he showed the possibility that “in the near future there might be something resembling a European army”. The security issues “increasingly impose on EU member states to fully participate”, even if a deviation from the key-principle is not even on the table: “We wanted Europe as a union of countries that bet on peace, not on military activities” and for this reason “our European army would never be an instrument of war, but a support to foreign policy“.

The topic of the pan-European army supporting EU foreign policy also found space during Sassoli’s speech at the Fossoli concentration camp (Modena), on the 77th anniversary of the Nazi massacre, on July 11, 2021. “Why do all authoritarian regimes care about us? We don’t wage war, we don’t even have an army… although it would be time to have one, if only to save on unnecessary national military spending“. In short, the EU does not want war and could never design a European army as an offensive tool, because “where there is conflict, we choose diplomacy and dialogue, and we do not impose values”. Nevertheless, illiberal regimes’ “fear” is a fact: “There is only one reason. European values scare them, because freedom gives equality, justice, transparency, opportunity, peace. And if it is possible in Europe, it is possible everywhere in the world”.