The Balkan athletes’ experience at the Beijing 2022 Winter Olympics: new historical records, high hopes for the next editions and a long road to success

The Beijing 2022 Winter Olympics ended yesterday (Sunday, February 20) and for the Balkan countries it is already time to take stock. The outcome of the Balkan athletes is 2 golds, 3 silvers and 2 bronzes. Or rather, it would be better to say the outcome of Slovenia, the only delegation to win medals in this edition of the Winter Olympics (the same happened four years ago).

A total of 72 athletes took part, 37 men and 35 women. More than half were Slovenians (44). Only one Albanian athlete went to Beijing and the other countries also struggled to qualify: Kosovo and Serbia (2), North Macedonia and Montenegro (3), Bosnia and Herzegovina (6) and Croatia (11). As for Tokyo 2020 Summer Olympic Games, gender equality was almost achieved: one delegation was women’s majority (Croatia) and three in equal number (Bosnia and Herzegovina, Kosovo and Serbia).

These 72 athletes competed in 8 different sports categories, with a clear dominance of cross-country and alpine skiing. Although, paradoxically, the largest number of medals was won in ski jumping (4, including 2 golds, 1 silver and 1 bronze). If you want to know all their names, just look at the BarBalkans’ Instagram story highlights, dedicated to Beijing 2022. 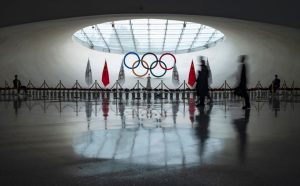 In short, let’s say that the positive aspects of the Western Balkans’ athletes experience in Beijing are not related to the number of medals won. This is true for all the delegations, except – obviously – for Slovenia. For Ljubljana this was one the most successful edition in its history at the Winter Olympic Games, which began in 1992. The record was established in Soči 2014: 2 gold, 2 silver and 4 bronze medals. However, at that edition the Slovenian delegation counted a third more athletes (66), in 8 different disciplines.

Eight years later, Slovenia won 7 medals, but with fewer athletes in fewer sports (6). A great improvement compared to Pyeongchang 2018, when 71 athletes (in 9 sports) filled the medal table with just 1 silver and 1 bronze. The snow lion’s share has gone to ski jumping, thanks to the team competitions (mixed and men) and the historical performance in the women’s normal hill: Urša Bogataj and Nika Križnaron got on the highest and the lowest step of the podium with the Slovenian flag. The other medals came from the snowboard parallel giant slalom (men’s and women’s) and the alpine skiing giant slalom.

Apart from the medals, there are also other aspects that have made this edition of the Olympic Games somehow historical. For example, it is certainly true for Kosovo. This was the second edition of the Winter Olympics in the this country’s history, and the first time a female Kosovar athlete participated in the Winter Olympics. Her name is Kiana Kryzeiu, she is a skier and is not yet 18. Although she did not win any medals, she has already made history. As well as her only delegation partner, Albin Tahiri, also a skier. In 2018, he was the first Kosovar athlete ever participating at the Winter Olympics and this year he did an encore with another memorable qualification.

NEWS – History has been made by this 17 year old girl from #Kosovo. The first woman ever from her country competing at the Winter Olympics ever 🤩🙌🏻 #KianaKryeziu pic.twitter.com/qgmUchMCnV

Except for the historical first times, there is bitterness for many Balkan delegations that have still never got on the podium in their own history at the Winter Olympics. In addition to Kosovo, there is also Albania, Bosnia and Herzegovina, Montenegro, North Macedonia and Serbia. Each of these countries has made its debut in different editions – Serbia and Montenegro did not even make it together between 1998 and 2006 – and in Beijing 2022 they failed to break this frustrating tradition.

Nevertheless, it has to be said that the frustration might be handled differently between Balkan countries. For example, if we consider the age of the athletes who participated in the competition in these two weeks. Thanks to an effort of their respective National Olympic Committees, Albania and Montenegro could grow some interesting sporting movements around promising young athletes who were in Beijing. Albanian skier Denni Xhepa was born in 2003, while the 3 Montenegrins competing in cross-country and alpine skiing – Eldar Salihović, Jelena Vujičić and Aleksandar Grbovic – are between 18 and 22 years old. The same cannot be said for the other Balkan delegations, which will have to find fresh energy to renew themselves and to aim at new achievements in the next editions of the Winter Olympics.

A final consideration has to be made about Croatia, the greatest disappointment among the Balkan countries at Beijing 2022 Winter Olympics. With 11 athletes – including 6 in alpine skiing and 3 in cross-country – there was a good opportunity to break a negative record that has been going on since 2014. Back then, Ivica Kostelić won a silver medal in alpine skiing. We have to go back 20 years for the greatest Croatian performance: 3 golds and 1 silver, thanks to a delegation slightly larger than this year’s (14). The dreams of glory in the Western Balkans remain. The road to reach them seems a large sheet of ice.