The biographies of the two protagonists of “The Langer-Sassoli Project” highlight the experiences that shaped the political, social, civil and human ideas of Alexander Langer and David Sassoli

Everyone’s ideas come from a myriad of factors that are almost impossible to predict. Family, social and educational background, encounters, travels, readings, life experiences, reactions to unexpected events, professional choices, perseverance, weaknesses. And so many others that do not fit on this list. In the end, what emerges is a finished – and at the same time in constant development – result: a human being with their own political, social, civil beliefs. The difference lies not only in the value of the ideas, but also in the level of inspiration for others. Alexander Langer and David Sassoli have really made a difference and this Project was born to testify it.

The first page of the Langer-Sassoli notebook bears the biography of these two men and politicians who have been and continue to be a source of inspiration for thousands of people in Europe and around the world. Thanks to their ideas – which we will analyze one by one – all this has been possible. But, precisely, these ideas were built on what they saw, did, undid, fought for and believed. It is worth starting from here. 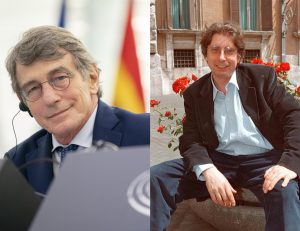 Alexander Langer was born in Vipiteno/Sterzing (in the autonomous province of Bolzano) on February 22, 1946. His family was secular, democratic and tolerant on ethnic issues, in a region, South Tyrol, divided between the Italian- and the German-speaking communities. As a child, Langer attended an Italian kindergarten, then a German classical high school in Bolzano/Bozen, but lived in a predominantly Italian neighborhood. “None of the flags that often fly in front of hostels or campsites represent me, I don’t miss them. On the other hand, thanks to German and Italian languages I can speak and understand from Denmark to Sicily“, he writes in his Autobiografia Minima Personalia. 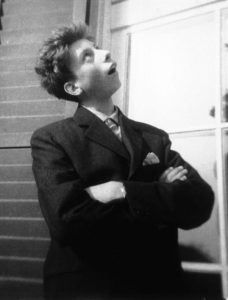 As a young Catholic, he decided to take the path of the priesthood, but was dissuaded by the opposition of his parents. Then, he moved to Florence, to attend the Faculty of Law. These were the years of the dialogue between Catholics and Marxists and Langer discovered the popular soul of the Italian left, thanks to his professor Giorgio La Pira. In Florence, he attended the Catholic dissent movements, met Don Lorenzo Milani and in 1967, he founded the monthly magazine Die Brücke (The Bridges) with other young South Tyrolean intellectuals. After a year of military service, he joined Lotta Continua (far-left political organization) and became friend with the leader Adriano Sofri. He collaborated and later became director of the movement’s daily newspaper in Germany, where he met Italian immigrants and analyzed international peace movements.

At the end of this experience, he returned to Bolzano/Bozen and was elected as a regional councilor in 1978 in the ranks of Neue Linke – New Left, an electoral list supported by the Radical Party and characterized by his interethnic and environmental beliefs. In 1981 (and again in 1991), he refused to declare his ethnicity in the ethnic census, opposing the division of communities in South Tyrol. Together with his friend, the climber Reinhold Messner, he became a member of the South Tyrolean Green Party and the promoter of the Green political movement in Italy and Europe. He considered it an innovative and transversal force, where he could bring together his political and personal experiences: the leftist culture, the radical area, the Catholic commitment and the thrust of non-conformist movements. In 1984, he gave a keynote speech at the first national assembly of the Green party in Florence: “I find myself invested with the role of forerunner and point of balance that I willingly carry out, in the perspective of quickly passing the baton to others”. 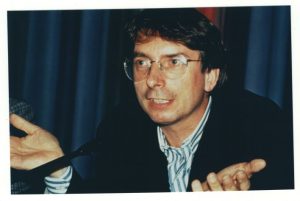 In the European elections of 1989, he was elected in the North-Eastern Italy constituency and became the first President of the Green Group in the EU Parliament. Two years later, he was appointed President of the EU delegation for relations with Albania, Bulgaria and Romania: he founded the Committee of solidarity with Albania at the time of the collapse of the Albanian State, promoted the EU-Austrai Transit Agreement and the EU-Slovenia Cooperation Agreement and carried out several European Parliament missions, including to Sarajevo. He increased his commitment in support of inter-ethnic conciliation in former Yugoslavia. The European Parliament approved his report for the establishment of an International Criminal Tribunal for the former Yugoslavia. With Marijana Grandits, Member of the Austrian Parliament, he founded the Verona Forum for Peace and Reconciliation in the former Yugoslavia, to offer a dialogue forum for hundreds of people who met in Verona, Vienna, Paris, Tuzla, Zagreb and Skopje.

Since the outbreak of the Yugoslav Wars, Langer supported the Anti-War Center in Zagreb, the Center for Non-Violence in Ljubljana and the Anti-War Center in Belgrade, and participated in two Peace Caravans to Kosovo and in the territories of the former Yugoslavia. Once re-elected as a Member of the European Parliament in 1994, he illustrated for the first time the idea of establishing a European Civil Peace Corps, to manage, transform and prevent conflicts without the use of violence or weapons. But the events overwhelmed him. After the massacre of Tuzla (which lead to the massacre of Srebrenica), Langer called for sending soldiers to stop the aggression of Ratko Mladić‘s militias and to protect the victims. His appeal remained unheard and the sense of loneliness and defeat aggravated his depression. On June 26, 1995, in Cannes, he participated in the protests against the inertia of the European heads of State and government about the violence and the ethnic cleansing in the region, writing his last article: Europe will die or reborn in Sarajevo.

The drama in the Western Balkans devoured Langer’s insides and led him to suicide on July 3, 1995. At the age of 49, he hanged himself from an apricot tree in Pian dei Giullari, near Florence. He left three notes to his wife, Valeria Malcontenti, to his family and friends: “The weights have become unbearable, I can’t take it anymore. I beg you all to forgive me also for this departure. Thanks to those who helped me to move forward. No bitterness towards those who have compounded my problems. Come to me, all of you who are weary and burdened. I lack strength even in accepting this invitation. So I am leaving more desperately than ever. Don’t be sad, continue in what was right“. Alexander Langer’s body is buried in the small cemetery in Telves next to his parents, who encouraged him as a child to be open to the world and to dialogue.

In Florence, where Langer studied and died many years later, David Sassoli was born on May 30, 1956. Ten years and 350 kilometers separate them, but some aspects are similar. Like Langer, Sassoli grew up in the tradition of democratic Catholicism (the same of Aldo Moro, Giorgio La Pira, Sergio Mattarella and Romano Prodi), but he lived in Rome, where he moved with his parents during his childhood. He joined Rosa Bianca (White Rose), a group of political culture formed by young people from Catholic associations, and joined the AGESCI scouts. In the Eighties he was involved in the political experience of the Democratic League, destined to resurface a few decades later. 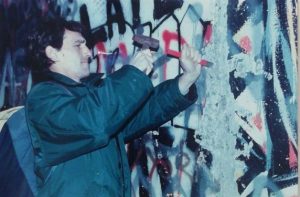 He attended the Faculty of Political Science at Università La Sapienza in Rome, but he did not finish his studies to devote himself full-time to journalism, his real passion. It was inherited from his father Domenico, a journalist himself. Sassoli started working for ASCA press agency, became a professional in 1986, a year after the new job in the Roman editorial staff of Il Giorno. He witnessed crucial historical events, such as the fall of the Berlin Wall on November 9, 1989. The turning point was in 1992, when he was hired in the national TV broadcast as a reporter of TG3, where he dealt with Mafia, Tangentopoli and investigations on State massacres. Seven years later, he joined the editorial staff of TG1 as a special correspondent and later anchorman (deputy director in 2007), entering into the homes of all Italians every evening at 8 p.m. 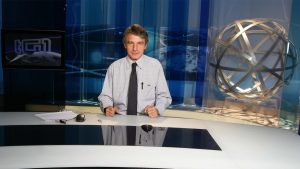 Between June 6 and 7, 2009, 30 years after his first political experiences, Sassoli officially entered the European public arena in the elections for the EU Parliament, in the ranks of the Democratic Party. Thanks to 405,967 preferences he was the first elected in the Central Italy constituency and one of the most voted in the whole country: for this reason he was nominated head of delegation of his party in the European Parliament. He came second in the PD primaries for the local elections in Rome in 2013 (behind Ignazio Marino, future mayor), while a year later he ran again in the European elections: he was elected Member of the European Parliament and on July 1, 2014 Vice-President of the EU Parliament with the 393 votes.

Sassoli was the rapporteur of the most important EU railway reform for the opening of the high-speed market, he was attentive to the Euro-Mediterranean policy for the development of dialogue with the Mediterranean and Middle East countries’ institutions, and finally member of the EU electoral mission in Lebanon and the EU-Serbia delegation. Throughout the entire legislature, he led a battle for a more efficient European Parliament and open to citizens, promoting transparency, traceability of expenses and efficiency in the reporting of MEPs activities. 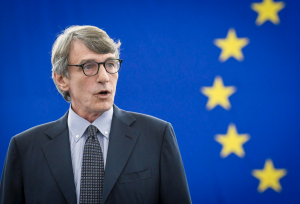 In 2019 he ran for the third consecutive time in the European elections and on July 3, he was elected President of the EU Parliament with 345 votes on the second ballot, with the compact support of the pro-European front. He repeatedly expressed the need for a progressive transfer of sovereignty for the national States to the EU institutions, for a better reception of migrants and for more severity against violations of the rule of law by Member States. Sassoli’s mandate was affected by the COVID-19 pandemic, but under his leadership the European Parliament was one of the fastest institutions in the world to adapt to change: he pushed for the adoption of the remote voting procedure, but he decided to never close the doors of the EU Parliament. A message of hope, as well as a strong sense of institutional responsibility: “Democracy cannot be suspended during such a dramatic crisis, as legislators we have the means, the possibility and the duty to be useful”.

Sassoli was betrayed not by his mind, but by his body. He suffered from a severe form of myeloma, that forced him to a hematopoietic stem cell transplant in 2011, before being hospitalized again for pneumonia caused by legionella. His health deteriorated again in September 2021, taking him away from the work of the EU Parliament for two months. He returned for just one month to preside over the institution, but by December 26 he was again hospitalized due to serious immune complications. He died on January 11, 2022, at 1:15 a.m. of pneumonia at the Oncological Referral Center in Aviano (Pordenone). He was only 65 years old. A State funeral was celebrated in Rome, in the presence of the archbishop of Bologna and friend of his youth, Cardinal Matteo Maria Zuppi. As per his will, David Sassoli was buried in the cemetery of Sutri, 520 kilometers away from the place where Alexander Langer’s body has been resting for almost 27 years.