A “human bridge” has been built between Bosnia and Herzegovina and Verona. In this city, the commitment of some young people who want to change the narrative and the situation on the Balkan route is becoming more and more disruptive. The NGO they founded in the spring of 2016 is called One Bridge to Idomeni.

Idomeni is a small village in Greece at the border with North Macedonia, where more than ten thousand people were stranded by European border closures between 2015 and 2016. Since then, One Bridge to Idomeni has been working on the European borders of the Balkan route, helping migrant people in Greece and Bosnia and Herzegovina. But it also carries out another essential activity: it brings “home”, in Verona, the testimonies of the people met, through meetings and school activities.

Together with ULULA & LaForesta, One Bridge to Idomeni is providing support to the Bosnian ONG U Pokretu. In Verona, BarBalkans met Serena Zuanazzi and Matteo Bertelli – two members of the NGO board, leading the trip to Bihać – to talk about what is happening in Bosnia (inside and outside the newly inaugurated Lipa camp), how the project of U Pokretu can change the situation on the ground and how important the dialogue is, especially among young people.

“Like a starred restaurant in a maximum security prison”

A year after the refugee camp burned down in Lipa, a new settlement has been opened. What is the situation now?

“Compared to last year in February, when we visited the temporary camp, the situation has improved. After the fire in late December 2020, military tents were set up with heat pumps (not enough to heat all the rooms), chemical toilets and power generators provided by the Red Cross. Now, new containers for 1500 people have been built in the former International Organization for Migration’s camp. There are services, heating and electricity. You can see it from afar: it looks like a stadium, for how much it is illuminated.

However, even if this is the only currently sustainable reception system in Bosnia’s freezing winter, the Lipa camp is a failure. There are only about 350 people in Lipa, because no one really wants to be there. Europe has funded a camp with huge problems. To make a comparison, it’s like a starred restaurant in a maximum security prison. It’s not the right solution in this context. We need to think about different forms of reception”.

What are the main problems of this camp?

“First of all, it is a hidden reception system and far from everything: it takes 8 hours on foot to get to Bihać. Then, we have to remind that the police always clears the informal camps in spring/summer – when tourists from the United Arab Emirates and Turkey arrive – and it often happens that there are no agreements with the authorities of the camp.

Moreover, it seems that no one has ever made an analysis of the context of the Balkan route. A lot of money has been spent on a refugee camp far from everything, in the extremely variable situation of the migration route. For example, it cannot be excluded that this year the route will no longer pass through Bosnia – or Bihać specifically – as it happened before 2017. People can find new ways to get to Europe, if they find major obstacles. What we see is a shortsighted approach, that does not guarantee decent reception”.

A land for young people

And what about Bihać?

“When we returned to Bihać with ULULA & LaForesta in May 2021, one of the most crowded places was Dom Penzionera. This is an unfinished and now dilapidated Yugoslavian building, which was supposed to be a rest home by the river and close to the city center. Its construction was interrupted by the war outbreak in Bosnia in 1992.

The building was occupied several times between 2017 and 2018. At the time, the Balkan route moved to the canton of Una Sana, in Northwestern Bosnia, as it became impossible to transit from Serbia to Hungary. The situation for these people is always precarious and risks causing tensions with the local population. Both because of the evictions by the police and the cooling of the relationship after years of coexistence”.

Read also: The new album by ULULA & LaForesta is an invitation to follow them in Bihać

What does the project by U Pokretu represent in this context?

“The project is primarily aimed at young people, both local and migrant. First of all, it provides services in a city that young people leave as soon as they can, because of the lack of opportunities. And then, it is a point of contact and dialogue between very similar age groups – between 15 and 30 – who feel the need to talk about migration and the creation of new opportunities.

As Bosnians are not EU citizens, they can understand the difficulties of moving to Western Europe for study, work or a better life. In short, when they emigrate. At the same time, when they relate to migrant people who pass through Bosnia, they are in daily contact with a complex situation they don’t understand. And they often don’t accept it. This is why it’s crucial to connect young people, stimulating reasoning on the parallelism between these two migration trajectories. It shows that everyone can have a reason to move, more or less familiar to us, and that human beings and their personal life stories are the core of migration”. 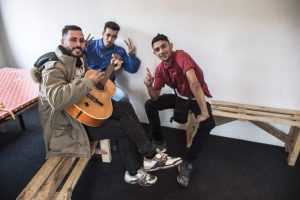 People don’t flee only from wars

Speaking of personal life stories, your other activity concerns the testimonies from the Balkans ‘back home’.

“For us, testimonies are crucial, because they give us the chance to tell ‘home’ what we saw in the Balkans: the people, their stories, the situation just beyond the EU borders. But it also allows us to stimulate a reasoning on how we relate to the migrant people in our everyday lives. We often get in touch with people already sensitized. This is why we have started to organize meetings in schools in Verona as well, where receptivity can vary widely.

For example, we frequently meet second- or third-generation children of people with a migrant background. At first, we thought that they were uncomfortable with talking about migration. Instead, they prove to be the most involved ones, telling their personal experiences and those of their parents. They help us to focus on the reason of things. Why should someone want to leave their own country? What is their story? What aspirations do they have for the future? We talk too often about ‘flows’ and ‘waves’, as if migration were a scary sea. Instead, we have to keep in mind the thousands of experiences and personal stories”.

What is the most important message you try to convey?

“That there are countless reasons that can push people to migrate. Not only wars. We usually think this is the only legitimate reason. But we forget that many young people may be looking for a better future, that they may have only seen on television. After all, the same happens to young Bosnians and Europeans. Many among us and our friends live abroad, and not because there is a war in our countries.

This is what we try to convey in our meetings in schools, not only in Verona but also in Bihać. We are trying to stimulate more discussions on gender equality, climate change and human rights. These are all drivers that can push people to leave their countries. If we change the way we relate to the stories of individuals, our perception of migration can change as well”. 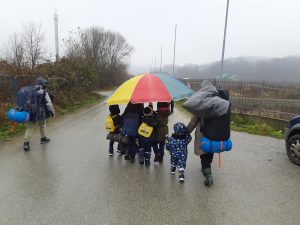