On January 11, the President of the European Parliament, David Sassoli, died at the age of 65. This is BarBalkans’ tribute to his commitment to peace, democracy and engagement with the Balkans

The President of the European Parliament, David Sassoli, passed away. He died at the age of 65 of a complication due to a dysfunction of the immune system. He was a fair man, a respected politician, a good President. Even those who never knew him personally will remember David Sassoli for the firmness of his values – his Europeanism, social justice, equality for all men and women, the Rule of Law – and for his complete openness to dialogue. This is why he was not only a respected President, but also an admired human being that everyone appreciated.

Someone said that he was “a great example of life”. Or perhaps he simply embraced with all his essence the principles of democracy and of the European Union. And whoever has even made an eye contact with him at least once had been able to understand it. There are plenty of obituaries, analyses and testimonies to read, in order to understand who David Sassoli was and what he represented in our recent history.

BarBalkans wants to remember him as one of the strongest supporters of the EU engagement with the Western Balkans. It is no coincidence that his first trip as President of the European Parliament outside the EU borders in 2019 was to North Macedonia, where he reiterated that the MEPs will always stand by the Balkan citizens along their road to the EU. He had the opportunity to make his point several times during his last two and a half years. As President, as a man and as a convinced pro-European: the Balkans are the heart of Europe, there is no Europe without the Balkans. 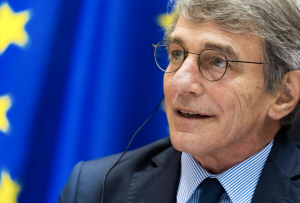 “A way to peace and democracy”

It was June 29, 2021, when President Sassoli outlined the role of parliamentary institutions in Europe and in the Western Balkans. At the European Parliament – Western Balkans Speakers’ Summit, Sassoli addressed his colleagues, urging them to work together toward a common European future: “As inclusive spaces of dialogue and exchange of views, Parliaments can foster mutual understanding and reconciliation in the Western Balkans, thus directly contributing to peace, stability, prosperity and stronger democracy in the region”.

A real “way to peace and democracy“, the Parliament (both national and European) represents the fundamental institution for the functioning of public affairs: “In pandemic and post-pandemic times, it it is paramount that they fully exercise their legislative, scrutiny and oversight roles”. And it is precisely the COVID-19 pandemic that highlighted “how much we depend on each other to address current and future challenges“, in particular concerning sustainable development and the long-term socio-economic recovery of the region. This is why there is a need to stimulate the Balkan countries’ road to the EU: “Enlargement remains more than ever a geostrategic investment in a stable, strong, and united Europe“.

Very positive 2nd summit with the speakers from the #WesternBalkans!

Enlargement means hope, for all sides! We call on the Council to keep its promises and speed up the enlargement process.

This is a geostrategic investment, for a strong, united Europe. https://t.co/znHkqeU1NH pic.twitter.com/ounhDFgGXS

It was for this reason that Sassoli called on the 27 EU Member States to deliver on their promises to the Balkans and to “urgently take decisive action to accelerate the enlargement process”. President Sassoli promised that “the European Parliament will remain a committed partner towards a common European future“, offering support for dialogue, parliamentary capacity building, election observation and human rights actions. The Western Balkans’ accession to the European Union “means hope, for all sides!”

The issue of EU enlargement was really significant to President Sassoli. On the eve of the EU-Western Balkans Summit in Kranj (Slovenia) on October 6, 2021, the President of the European Parliament sent a letter to the President of the EU Council, Charles Michel: “Having a peaceful, stable and prosperous continent would immensely benefit all European citizens. This new impetus can only have a positive effect in the region and could contribute to its democratic transformation and to good neighborly relations”.

Against delays, vetos and tactical wait-and-see policy, Sassoli warned the heads of State and Government of the 27 Member States that “any further delay or hesitation risks encouraging others who wish to gain influence in the region”. A failure in keeping promises made to the Balkan partners means “betraying citizens’ hopes”. The starting point is the “fulfillment of accession criteria”. The fundamental values and principles that underpin the European Union “must remain the light that guides the way for each country on the path towards accession”. A “truly geopolitical Europe” can only begin at the borders, “with our closest friends, with whom culturally and historically we share the same European identity”.

We call on leaders at the #EUWBSummit2021 to give new impetus to the accession process.

Enlargement, based on common values, benefits us all – it is time to move forward.

Further delay risks encouraging others who wish to gain influence in the region. https://t.co/450JxorPdd

Finally, the issue of borders. On several occasions, President Sassoli had the opportunity to reiterate that migration policies – including on the Balkan route – must be guided by the principles of humanity and solidarity. He recalled this belief in his last institutional speech at the European Council on December 16, 2021.

“Protecting Europeans also involves taking resolute action to better integrate our migration and external border management policies. In my speeches I have often raised the issue of migration and asylum. It is no secret that migration has become a key issue in EU external relations and on our foreign policy agendas. Parliament is already working to improve the Commission’s proposals on the European Pact on Migration and Asylum on the basis of a new solidarity and responsibility pact. The Council will play its part in this too, and we must now find an agreement as a matter of urgency, otherwise populism and short-termism will prevail”.

And then his last speech ever on the social media, wishing happy holidays and a hopeful 2022. This is almost a warning for his spiritual legacy: “In 2021 we have seen new walls. In some cases, our borders have become the border between moral and immoral, between humanity and inhumanity. Walls erected against people who seek shelter from the cold, from hunger, from war, from poverty.

We have fought with those who ask for more democracy, more freedom, with women who ask for rights, with those who ask for freedom of thought, who continue to ask for free and independent press. Today, Europe gives us great opportunities with the Recovery Plan to abandon indifference: it is our challenge for a new world that respects people and nature, and believes in a new economy, based not only on the profit of a few but on the welfare of everyone”. 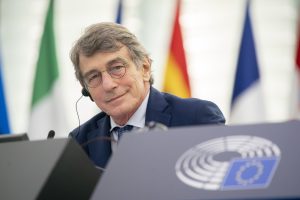 For some time, BarBalkans newsroom was thinking about the possibility of organizing a conference to remember the figure and the commitment of Alexander Langer, a South Tyrolean politician who fought for a fairer Europe and for the pacification of the Balkans in the Nineties.

The guest of honor – if we ever had the opportunity to invite him – should have been the President of the European Parliament, David Sassoli. We would have tried to discuss with him how the challenges set out by Langer have been answered by the European Union and what still remains to do, approximately 30 years after his death.

President David Sassoli is no longer with us, and even this little BarBalkans’ utopia has faded away. However, as the writer Eduardo Galeano said, utopia is on the horizon, its point is to keep walking. And we want to take this path forward, with even more determination. In the coming months, preparations will begin for “The Langer-Sassoli Project” event. There is still a lot to be defined. But it will be a great day for democracy, for Europeanism, for the Balkans and for the memory of these two great men and politicians.

This is a promise. Goodbye, Mr. President. 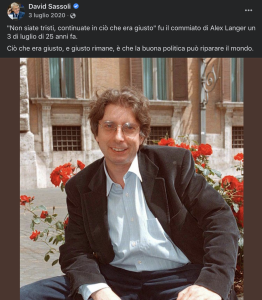