“Poveri noi” (Poor Us) is the latest project of the Italian band ULULA & LaForesta, focusing on the situation in Bosnia, one of the most sensitive European borders. Their experience calls us to action

One of the best things that music can do is to make people aware of issues that are less known. This is certainly the case of the Bosnian border, one of the most sensitive in Europe, and the migration route that passes through the Western Balkans. The credits for the musical notes guiding us goes to ULULA & LaForesta, an Italian project by the singer-songwriter Lorenzo Garofaloand the musicians Andrea Mandelli, Maximilian Agostini, Filippo Chiarini, Alessio Profeti and Simone Carradori.

Poveri noi. Poor us. This is the title of their latest single and of the album to be released on Tuesday 11 January. But it is also the heart of a bigger project, which directly involves ULULA & LaForesta and now turns to us. To answer the call, to start acting. In Verona, BarBalkans met Lorenzo Garofalo (ULULA) and Nicola Veronesi, video editor and texts writer of this project in Bosnia.

«Poor us, we who have everything». Where does this lead come from?

“As it is often the case, this project was born a few years before the song was released. It is an ironic – but at the same time not distressing – criticism of wealth and the prevailing mentality in our society. A way of living that leads us to think that we always know everything, that we always have the right to feel sorry for ourselves. In short, that we have no responsibilitiesand we don’t have to fight and commit to be part of the change. Poveri noi is a continuous alternating between wealth and poverty. Not only ours, but also concerning the realities that we can discover”. 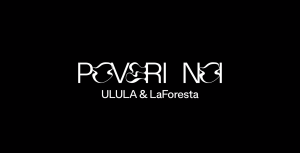 It is only by watching the video that we grasp a deeper meaning.

“We wanted to intertwine the lyrics of the song with the images of the people, the lives and the experiences we found in Bihać, Bosnia. The video, realized with the support of Cesare Ambrogi, is precisely the story of what we experienced on our journey in May last year. We decided to sacrifice a bit of quality in order to focus on ‘real life’ details. For example, the first clips are shot with a smartphone and there you can see all the difficulties with the required documents before departure.

The encounters with people are at the heart of the video. With the migrants in the Jungle, with the Bosnian citizens living there, in an increasingly difficult situation due to apathy and depopulation. But also with the experiences of people who are trying to build something new in Bihać, to connect migrants and Bosnians. To show that there is a lot to be done and that everyone can help. The release of the single in November was preceded by a series of short videos that focused on the many themes at the heart of the project. Migration and the Jungle, depopulation in the village, commitment to the territory, the role of volunteers…” 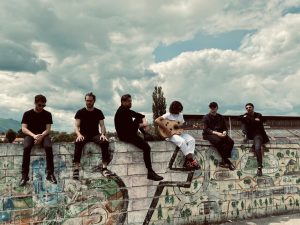 How did you come up with the idea of going to Bihać?

“We have been friends all our lives and Nicola is a great connoisseur of the Balkans. It all started between Verona and Milan, during the pandemic. At the beginning we ourselves doubted whether we would really be able to leave. However, we felt the need to go to Bosnia to see the situation and to talk about it as a lived experience.

In addition, we wanted to act and to offer concrete support. This is why we got in touch with the Italian non-profit organization One Bridge to Idomeni, which has been working along the Balkan route since 2016. They help migrants on the ground and bring back ‘home’ precious testimonies. Together we started to think about how we could build a metaphorical bridge to Bosnia, telling with music, videos and texts what we were going to do. This collaboration resulted in support for the Bosnian NGO U Pokretu [In Motion, ed.], which offers a better present and future to local youth and migrants in Bihać”. 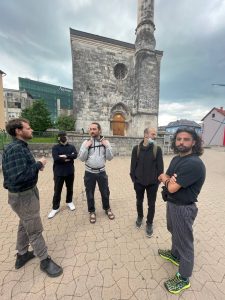 The first three words that come to your mind to describe the atmosphere you breathed in Bihać.

“Restlessness, melancholy, sharing. It was a dive into the past and into places of suffering. You can sense a certain fatalism about issues that for us can be a taboo or that we are used to think about in a different way, such as the COVID-19 pandemic. There is an uncoordinated balance between the distance in kilometres, that separates Bosnia from Western Europe, and the distance of experiences that can be lived. The fatalism is ancestral and probably it is due to the restless history of the Balkans. In the last 25 years, the population of Bihać has more than halved. Today, those who remain have to live with the lack of opportunities. It is clear that on the last border of the Balkan route, migration is a much broader concept than elsewhere. Here, you can find intertwined issues that are deeply visceral for the existence of Bosnia itself.

When we were to Bihać, we also realized that people who live there have the same needs as we do. They want to learn a job, to dedicate themselves to art, to make the environment a livable place. As we discovered U Pokretu activities day by day, we saw how Dom Kulturni, the House of Culture of the town, has been redeveloped. This is a Yugoslavian building that has been rescued from decay thanks to the efforts of willing people. In there, a rehearsal room, a dance hall and a space for exhibitions have now been set up.

We met some girls learning traditional dances with their teacher. The local band Jall Aux Yeux, which blends reggae, rock and R&B sounds with typically oriental minor scale tones. And then Miograd, Daka for friends, the ‘village guru’. He is the only resident in Lipa, the place that hosts one of the largest refugee camps in the Balkans. Daka uses solar panels to obtain clean energy, he cultivates a vegetable garden and rebuilds farmhouses with the help of migrant people, to give them a little normality beyond the Lipa camp or the Jungle in which they are forced to live”. 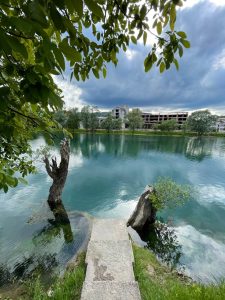 By the way, how did you perceive the migration phenomenon there?

“The issue of migration is central in Bihać. It does not concern only the militarization of the border, but also the feeling of being constantly under observation. We had the perception of being monitored at all times. The volunteers and us, while the migrant people also have to face laws that prohibit them from getting on public transport or having a job.

The migration route has found an outlet in Northwestern Bosnia, in the canton of Una Sana, since 2018. Here, there are not only official refugee camps, but also temporary camps, the so-called Jungle. In Bihać we didn’t even notice the Jungle, which is hidden in the vegetation. A young boy took us there, telling us his story and explaining what The Game is. This is the name these people give to their attempts to cross the border without being intercepted by the police. We were able to catch a glimpse of life in the bush: the composition of the tents, the needs of the people who live there, the hopes for the future. In such a precarious environment – which could be cleared at any time – you would never expect to see girls worrying about getting their nails done!”

We can do something (with ULULA & LaForesta)

What is the project that came out at the end of this experience?

“First of all, we wanted to organize a fundraising in support of U Pokretu, through the single and now with the release of the album on January 11. But that’s not all and it’s not just about money.

Through music and art we want to raise awareness of people who do not live in Bosnia. Our goal is to create a continuity project in Bihać. A project that revolves around the safe and stimulating centre of Dom Kulturni, where you can come into contact with Bosnians as well as with people from Afghanistan, Kashmir, Iraq. We wanted to show that art and music can be used to activate something concrete, mobilizing not only ideas but also people and projects.

We were inspired by the energy and strength of Marine, a French woman who founded U Pokretu together with her husband Dado and young people from Bihać. In order to build a fairer present and future, Marine fights every day to enhance the cultural potential of the local and migrant population, to raise awarenessabout inclusion, sustainable development and active citizenship. The complete redevelopment of Bihać House of Culture is the pivot of this whole project, which can be supported by each of us in some way”.

Which message do you want to convey through the upcoming album?

“First of all, Poveri noi should give a voice to all the people we met in Bihać. And it should also remember that often our wealth is simply the other side of the poverty suffered by someone we don’t know. This is an ‘exotic’ album, thanks to the musical experiments and input shared by LaForesta. Sounds and scales of Eastern Mediterranean area – that we are less familiar with – become the medium to go beyond our mental boundaries.

The aim is to stimulate solidarity, the goal is to give something to others. It is about concrete actions, not moralism. We would like the listener not to be passive. By listening, they can start a circle of new commitment. After echoing the situation at the Bosnian border, other people can now get involved to support U Pokretu or to go to Bihać”.

“Concerning this project, we would like to be able to come back to Bihać three or four more times, in order to establish the continuity we have set ourselves. It will be a success if we will manage to bring other artists and professionals to Bihać – painters, musicians, artists, dancers – who can support the activities in the Dom Kulturni through their content. It will be necessary a stream of willing people, who will put themselves at the disposal of the needs and the rebirth of the area. In short, our hope is to create a sort of ‘package’ of a few days in Bihać, with workshops, performances and discussions with local and migrant people.

At the same time, on ‘this side’ of the border, we hope to return to playing live, with tour dates around Italy and Europe. After two years of virtual reality, we are tired of relating with people through digital means that do not give back all the emotions that a concert unleashes. The basic idea is to get in and out, to exchange stories and experiences, to get in touch, to get to know what was previously only a distant or unknown story. In Bosnia, in Italy, in Europe”. 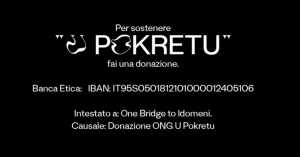